Why Scottish independence is now more likely because of Brexit 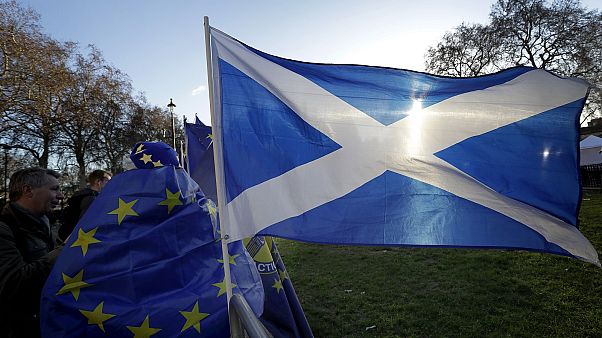 A demonstrator wearing a European Union flag stands with the flag of Scotland near parliament in London.   -   Copyright  Kirsty Wigglesworth/Associated Press

As the morning of September 19 dawned six years ago, despondent supporters of Scottish independence looked on dejected in Glasgow's George Square, draped in Saltire flags and their cheeks emblazoned with the word "Yes". While they had come close to achieving what many had thought unthinkable, the dream of an independent Scotland appeared to have careened off the road just as the finish line came into view.

Fast forward to today and the foundations of the precarious United Kingdom are once again shifting under the weight of public and political pressure. Opinion polls in Scotland now consistently show a majority in favour of secession from the rest of the UK, a trend that shows little sign of being just a flash in the pan.

So, why the sudden sea change in the fortunes of the independence movement in such a short period?

In the six years since the Scottish independence referendum took place on September 18, 2014, the UK has gone to the polls in two constitutional referenda, three general elections and devolved parliament elections. In this midst of this political tumult, one event in particular has had more impact than the rest: the EU referendum.

While the political and economic union that had persevered for 300 years held (just) in 2014, faultlines over Brexit could cause the final, fatal tremor that sees the UK collapse in on itself entirely.

"The main reason why we now see majorities for independence in opinion polls is that pro-Europeans who used to oppose independence have switched to backing it," Anthony Salamone, managing director and analyst at Edinburgh-based European Merchants, told Euronews. "In that sense, there already is a convergence between support for Scottish independence and support for the EU."

The UK electorate voted to leave the EU on June 23, 2016, by a slender majority of 51.9 per cent, driven mainly by voters in England and Wales. Northern Ireland resolved to stay in the bloc, along with Scotland.

The latter, however, voted to remain in the EU by the highest margin of 62 per cent to 38 per cent. Furthermore, all local authorities in Scotland declared results in favour of continued EU membership, in stark contrast to England and Wales where the Remain vote was confined to London and other large cities like Cardiff, Manchester, Leeds and Liverpool.

This divergence between the composite countries of the Union has coloured the political discourse of the subsequent four years, during which time the Westminster government has negotiated the UK's exit from the EU. Scottish National Party (SNP) politicians, in particular, have taken umbrage at what they see as Scotland being taken out of the EU against the democratic wishes of its people, who have been ignored by the successive Conservative governments led by Theresa May and Boris Johnson.

It was the latter's elevation to the UK premiership which coincided with the biggest slide in support for the Union, with successive polls in the wake of the 2019 general election - in which Johnson won an 80-seat majority in the House of Commons - giving the independence movement a clear lead.

Johnson's handling of the coronavirus pandemic, which has often found itself in direct confrontation with that of Scotland's first minister, Nicola Sturgeon, has arguably damaged the Union's standing still further. The latest furore over the UK government's Internal Market Bill (IMB), which seeks to override elements of the Brexit agreement signed with the EU on Northern Ireland trade and - as some critics believe - arbitrarily blunt the powers of the UK's devolved governments, could be the final straw for Scots.

"Scotland feels increasingly separate - as a result of Brexit and English nationalism, and in the face of a Tory government under Boris Johnson now trashing both domestic and international standards of political behaviour, and mismanaging the Covid crisis to a lethal degree," says Scottish political commentator Kirsty Hughes, the former director of Scottish Centre on European Relations (SCER).

That Johnson has "trashed" Britain's standing on the international stage with the introduction of the IMB is something commentators in Scotland, including Hughes and Salamone, agree on.

"The international system can only function where states uphold their legal obligations," says Salamone. "This fact is well understood across the Scottish mainstream, as it is in the EU, so the prospect of the UK intentionally breaking its commitments in the Withdrawal Agreement worries many in Scotland.

"For those who are undecided on independence, this train of events is unlikely to increase their faith in the UK." 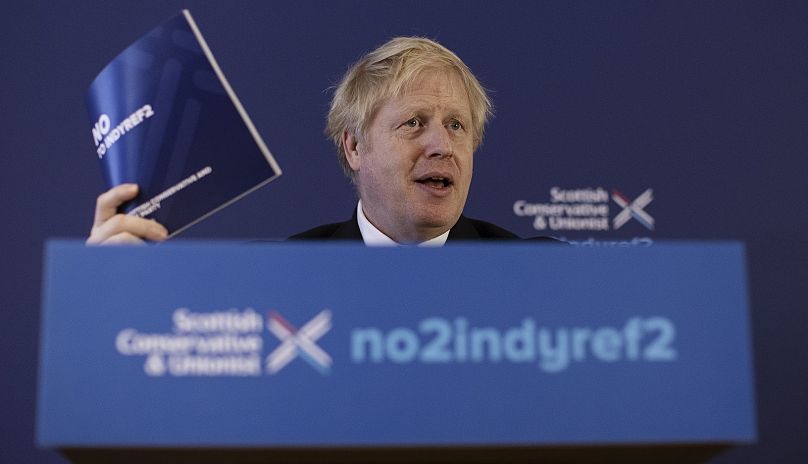 In 2014, voters were arguably swayed to vote No to independence based on the economic case for preserving the Union, which included the commitment to maintain Scotland's place in Europe.

"The economy and the currency were arguably the defining issues of the 2014 independence referendum. While they are still important to the independence debate, Brexit is perhaps the single biggest issue now," Salamone contends.

"This is not simply about the fact that Scotland has now left the EU, despite its opposition, because of the UK-wide decision. It's also about the way in which the UK government has handled Brexit throughout and the impact of Brexit on the powers of Scotland's political institutions," he adds.

"More fundamentally, many Scottish voters have the sense that, as a consequence of Brexit, the UK is heading in the wrong direction generally."

As Hughes observes, the independence movement is by and large pro-EU, which raises questions of those who voted both for independence in 2014 and to leave the EU in 2016 - the so-called "Yes-Leavers".

"For those who are still Yes-Leavers, if the SNP makes it clear there would be a referendum on joining the EU (as was typical in central and eastern Europe) then this won't be a huge problem," Hughes believes.

"For most in Scotland, independence from London is a bigger issue and change than Brexit, even though the two have become intertwined."

Salamone is of a similar mind. "I suspect that many Yes–Leavers would still vote for independence anyway – and argue their case for EFTA membership or an alternative during and after an independence referendum," he says.

While the Brexit vote is seen as the main catalyst to reach the high waterline enjoyed by the independence movement at the moment, Johnson's leadership in driving it forward has certainly not helped persuade Scots of the value of the Union.

"Scotland is, in essence, a small northern European country with a broadly social-democratic political majority," argues Hughes. "Johnson's wholesale attack on the UK's system of governance and its constitutional structures is all fuel for the pro-independence side in Scotland."

Should Scots decide that independence from the rest of the UK is the best course for the country, the current government in London has done little to inspire confidence that an independent Scotland would not be dealt with in the same way as the EU.

"Under Johnson, the UK now looks to be a maverick government and on the way to being if not a failed state, a failing democracy," says Hughes.

"How a maverick government would negotiate on independence is unknown. It would be in the UK's national interests to negotiate a sensible deal and to keep good relations with a newly independent Scotland but if that doesn't happen with the UK-EU deal, then it may not with a Scottish deal."

In order to gain independence, a new referendum must first be called, a prospect Johnson has already rejected. With polls suggesting a majority for pro-independence parties in the Scottish Parliament elections in May 2021, a second independence poll may prove hard to resist. If the UK government does persist, then Scotland could face a similar reality as Catalonia, which unilaterally held an "unconstitutional" referendum in October 2017.

"In Scotland, it's absolutely clear to most who support independence that it must be a legally and constitutionally sound process," notes Hughes. "But if the UK government does not fall apart or lose support given its contempt for British democracy, then Scotland - if the independence majority grows - may have to look at other routes to independence in the face of an anarchic, maverick and unpredictable UK."