Caught With Your Pants Down? Must Be Christmas in Catalonia 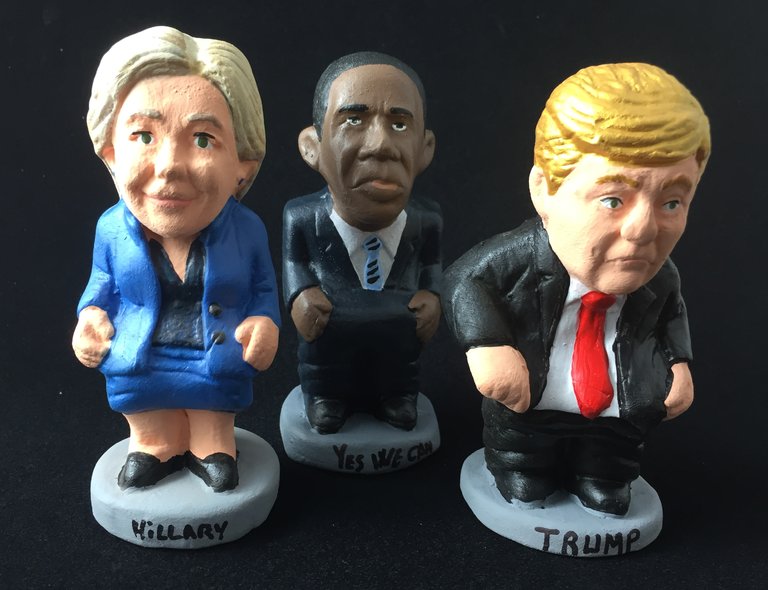 Here’s one thing Donald J. Trump and Hillary Clinton have in common. They are being depicted in new Christmas figurines in Catalonia in a rather rude position: squatting to defecate.

The unusual and irreverent “caganer” figurines are part of a longstanding holiday tradition in this region in northeastern Spain, and they are not meant to denigrate the politicians and celebrities they portray. Instead, the figurines hark back to a once-common use for human waste: to fertilize farm fields and grow more food in the days before agrochemicals. The figurines were first made in the 18th century.

The caganer, which can be translated as pooper, is placed somewhere among the characters in a Nativity scene: behind Mary and Joseph, perhaps, or between the animals gathered around the manger.

The hand-painted ceramic figurines generally stand (or rather, crouch) almost five inches tall, and are produced by about 25 companies around Catalonia, many of them small shops.

Most often, the caganers depict an ordinary Catalan in a traditional floppy red hat. But in recent years, a growing number have been made in the likeness of famous people. And that has made them popular far beyond Catalonia.

Almost half the figurines shipped by caganer.com, the largest distributor, go to the United States. “Just as we imported Halloween from America, I guess some Americans have discovered our tradition and really like it,” said Sergi Alós, the company’s managing director.

Caganers officially go on sale a month before Christmas, but many overseas customers place orders in advance — and this year, Mr. Alós said, they turned out to be something of a barometer. “Hillary started very strong, but then Trump caught up,” he said, declining to give specific figures.

Don’t read anything into the two candidates being shown with their pants down, he said: “We just look at who is in the news, focus on the positive and don’t try to say anything nasty or make fun of either Hillary or Trump.”

Also joining the caganer line this year is Marine Le Pen, leader of the far-right National Front in France, who hopes to follow Mr. Trump’s lead and win a presidential election next year with the backing of anti-establishment voters.

It remains to be seen whether the new models will rival the best-selling figurine of a foreigner: Barack Obama. “He has been our king since 2008,” Mr. Alós said.

A version of this article appears in print on December 6, 2016, on page A12 of the New York edition with the headline: On Christmas in Catalonia, Squatters May Be Welcome. Order Reprints| Today's Paper|Subscribe