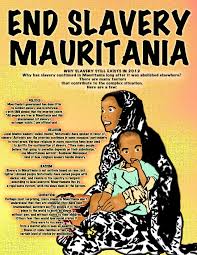 Pieter Tesch’ denial of the practice of slavery in Mauritania, should come as no surprise. The Public Relations Counsellor at the Mauritanian embassy in London was invited by the British TV program Africa Today, that was dedicating this edition to the persistence of the practice of slavery in Mauritania. Asked about whether Mauritania was embarrassed by its recent coronation as top-of-the-list slavery country in the world in the Global Slavery Index, Mr Tesch gave a straight answer: “There is no slavery in Mauritania”. According to him, Mauritanian government is forcefully fighting the “vestiges of descent-based slavery”, but one must not mix apple and oranges: “poverty and underdevelopment are not slavery”.

This is not the first time Mr Pieter Tesch, on behalf of the Mauritanian government, gave this opinion on the issue. He asserted that the testimonies and reports by human rights activists and international NGOs about slavery in Mauritania were irrelevant, in a controversial article published by The Guardian in September 2012. It is remarkable how the exact same discourse is desperately used when comparing the two statements.

Let’s not remind the reader of how the practice of slavery is endemic in Mauritania (Among others, see:  CEDAW report, iCAS and report by UN Special Rapporteur on Contemporary Forms of Slavery).

What is appalling however, is the silence of the international community when not speaking out against these type of delusional statements, which, as a result, makes it complicit. In addition, not a single Election Observer monitored the last elections in Mauritania, simply a result of the invitation having been sent out too late, according to High Representative of the EU, Cathy Ashton. On top of it all, incumbent president Mohammed Abdel Aziz, who led two coups in 2005 and 2008, and has been hanging on to power ever since, is currently Chairman of the African Union. President Obama is hoped to be raising this issue with the African Union Delegation that is travelling to Washington DC next month.

The sad discourse that the Mauritanian government has been using for the past decade, is clearly falling apart. If it weren’t for the almost 1 million Mauritanians living in slavery, one could easily be entertained by Pieter Tesch’ statements.

Copyright © 2014 UNPO, All rights reserved.
You are subscribed to the Unrepresented Nations and Peoples list

Add us to your address book
tornar