In Spain, a Thrifty Olympics Bid

By PAUL SONNE in London and ILAN BRAT in Madrid
The Wall Street Journal, 16-VII-12 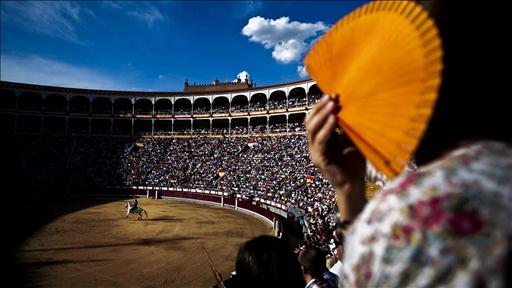 Spain is radically cutting its budget, but the beleaguered nation's capital still wants to pour public funds into a risky financial bet: hosting the Olympics. WSJ's Paul Sonne assesses their chances against the other contenders. Photo: AP

Spain is radically cutting its budget, but the beleaguered nation's capital still wants to pour public funds into a risky financial bet: hosting the Olympics.

Madrid—a finalist to host the 2020 Summer Games along with Istanbul and Tokyo—says the Olympics would help bring "economic and social recovery" to Spain and boost employment, particularly for young Spaniards facing a 52% jobless rate.

"We need two different things: power for the economy and an element of enthusiasm for the population," Víctor Sánchez, managing director of Madrid 2020, said in an interview. "We see [the youngsters] feel the need to be involved in a big project like the Olympic Games."

The city's bid committee is marketing the proposal as a shoestring Olympics—a model designed to show how to organize the event on a tight budget. Madrid's initial application says 78% of the sports venues already exist in the city and only about nine structures need to be built.

Its latest plan, due in early 2013, would go even further, slapping a roof on Madrid's emblematic bull ring to deploy it as a temporary basketball court and transforming a stadium for a second-tier soccer team into a field-hockey arena.

Skeptics point out that Madrid is among the most indebted cities in Spain. Ratings firm Fitch recently downgraded Madrid's regional government, predicting its debt could more than triple—to €23.7 billion ($29 billion)—in 2014 from 2010. The country's economy, meanwhile, is enduring a double-dip recession and the government is pushing through a €65 billion austerity program.

"This is not the moment to be thinking about this kind of event," says José García Montalvo, an economics professor at Barcelona's Universitat Pompeu Fabra, pointing to a contradiction: "If you claim that most of the infrastructure is already built and you're not going to use a lot of public money, then…you're not going to [create] a lot of jobs." 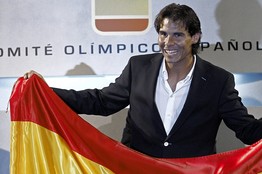 Mr. Sánchez says 300,000 jobs, mostly in the hotel, transport and service sectors, would be created, and many positions would become permanent.

Residents like José Luis Ortiz López, 52 years old, who owns a Madrid barbershop, are torn. He remembers the benefits of the Barcelona Olympics in 1992, but is afraid the government will waste money on the Games at a time when business is suffering.

"The government better watch the Olympic spending with a magnifying glass," he says. "It's not fair that we have to finance the Games and the politicians get to wear the medals." He adds: "We can't waste that money and raise taxes on everybody."

Madrid's bid raises another question: After London—which was selected to host the 2012 Olympics before the current crisis—how will austerity programs sweeping Europe affect the Continent's role in hosting Olympic Games and other big events?

Though they account for only about 7% of the world population, countries in the EU have hosted about half the Games and have won nearly half of the medals ever awarded. In the coming years, however, European government cutbacks could jeopardize that outsize role. The full impact of funding cuts in Europe on actual performance in Olympic competition remains unclear. Greek sports programs have been hobbled by budget slashing, but other European countries in the throes of austerity, such as Ireland and Portugal, have been more protective of elite sports budgets ahead of the Games this month.

Experts predict cities signing up to host the Olympics will increasingly come from emerging markets. After Britain, the next three host countries for the biennial event are Russia, Brazil and South Korea. The International Olympic Committee, or IOC, will decide on the 2020 host city in September 2013.

"We can see a shift in the bidding to countries and to cities that can afford these Games," said Janice Forsyth, director of the International Centre for Olympic Studies at the University of Western Ontario.

Spain has jobless levels akin to what the U.S. saw during the Great Depression, but Madrid says it can afford the Games.

The city predicts it will need $2.4 billion of mostly public money to build or renovate venues for the Olympics, says an April report from the IOC working group that evaluated the 2020 bids. Madrid would then raise additional funds from private sources to operate the Games.

London initially estimated the cost of hosting this summer's Games at £3.4 billion ($5.3 billion) but revised the budget in 2007, two years after winning the bid, to £9.3 billion. This year, the U.K. said the total cost of the Games to the British public could reach £11 billion in the end, due to additional security costs.

"In these bid documents, there is always an element of unreality," says Matthew Burbank, a political-science professor at the University of Utah who studies the Olympics.

The IOC gave Madrid the best score of all three finalists, but added: "Careful monitoring of Spain's progress on economic issues is needed to further assess future risks of delivery."

One of the biggest undertakings would be a 17,800-bed Olympic Village, designed in an "open-air museum" concept, which would "be fully financed and guaranteed by the City of Madrid" to ensure "minimum risk factor," according to the city's application, submitted in February.

The application also says a media and broadcast center would be financed by the city, the regional government, the Chamber of Commerce and Bankia SA, the ailing lender that drove Spain to request a €100 billion bailout for its banking sector in June.

Write to Paul Sonne at paul.sonne@wsj.com and Ilan Brat at ilan.brat@wsj.com

Corrections & Amplifications
The Olympics occur biennially, or every two years. An earlier version of this article incorrectly said they were a semiannual event.

A version of this article appeared July 16, 2012, on page A14 in the U.S. edition of The Wall Street Journal, with the headline: In Spain, a Thrifty Games Bid.