Fifty years of patient advocacy, including the shocking discovery of a mass burial site at Kamloops, have secured once-unthinkable gains. 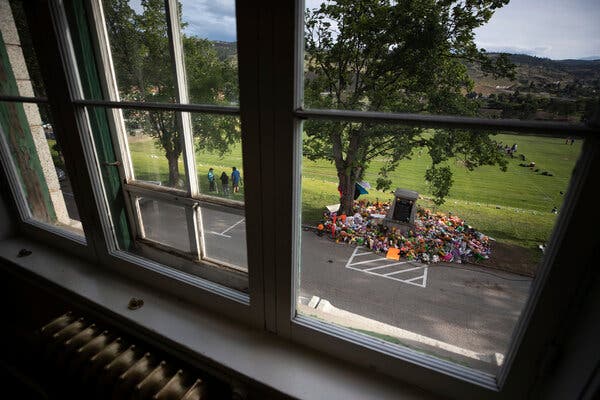 A makeshift memorial to honor the 215 children whose remains have been discovered near the Kamloops Indian Residential School in British Columbia, earlier this month.Credit...Darryl Dyck/The Canadian Press, via Associated Press

When an Indigenous community in Canada announced recently that it had discovered a mass burial site with the remains of 215 children, the location rang with significance.

Not just because it was on the grounds of a now-shuttered Indian Residential School, whose forcible assimilation of Indigenous children a 2015 truth and reconciliation report called “a key component of a Canadian government policy of cultural genocide.”

That school is in Kamloops, a city in British Columbia from which, 52 years ago, Indigenous leaders started a global campaign to reverse centuries of colonial eradication and reclaim their status as sovereign nations.

Their effort, waged predominantly in courts and international institutions, has accumulated steady gains ever since, coming further than many realize.

It has brought together groups from the Arctic to Australia. Those from British Columbia, in Canada’s mountainous west, have been at the forefront throughout. 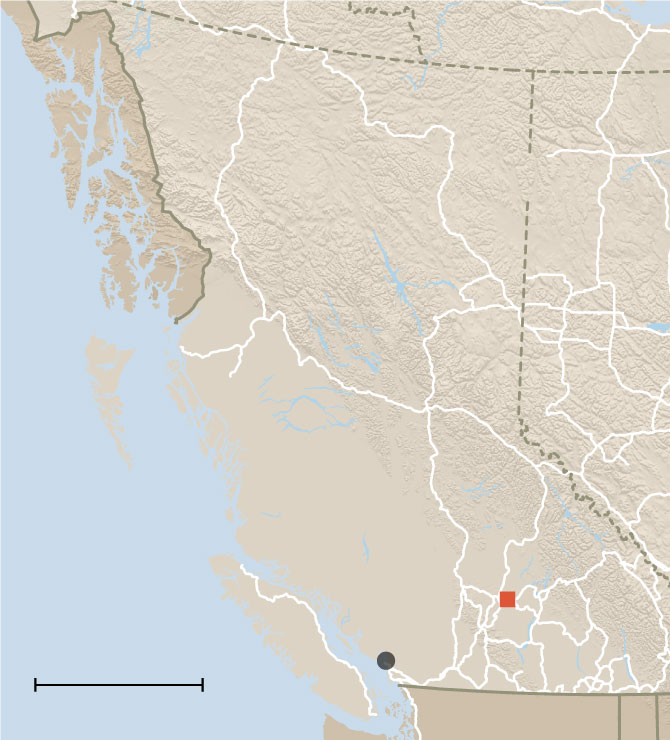 Only two years ago, the provincial government there became the world’s first to adopt into law United Nations guidelines for heightened Indigenous sovereignty. On Wednesday, Canada’s Parliament passed a law, now awaiting a final rubber stamp, to extend those measures nationwide.

It was a stunning victory, decades in the making, that activists are working to repeat in New Zealand — and, perhaps one day, in more recalcitrant Australia, Latin America and even the United States.

“There’s been a lot of movement in the field. It’s happening with different layers of courts, with different legislatures,” said John Borrows, a prominent Canadian legal scholar and a member of the Chippewa of the Nawash Unceded First Nation.

The decades-long push for sovereignty has come with a rise in activism, legal campaigning and historical reckonings like the discovery at Kamloops. All serve the movement’s ultimate aim, which is nothing less than overturning colonial conquests that the world has long accepted as foregone. 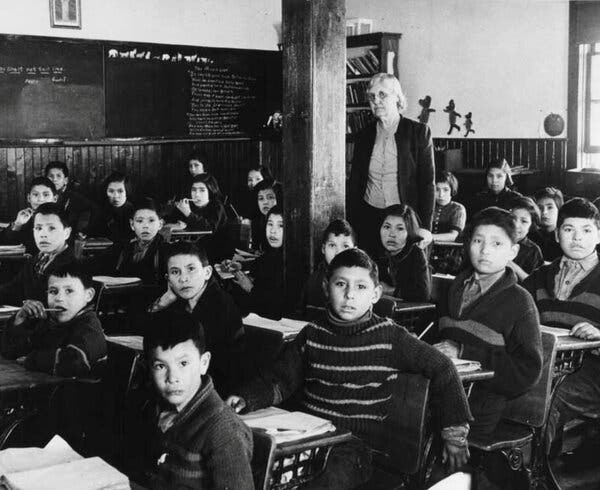 No one is sure precisely what that will look like or how long it might take. But advances once considered impossible “are happening now,” Dr. Borrows said, “and in an accelerating way.”

MASS BURIALS
How thousands of Indigenous children vanished in Canada.

The Indigenous leaders who gathered in 1969 had been galvanized by an array of global changes.

The harshest assimilation policies were rolled back in most countries, but their effects remained visible in everyday life. Extractive and infrastructure megaprojects were provoking whole communities in opposition. The civil rights era was energizing a generation.

But two of the greatest motivators were gestures of ostensible reconciliation.

But the declaration excluded the Americas, Australia and New Zealand, where colonization was seen as too deep-rooted to reverse. It was taken as effectively announcing that there would be no place in the modern world for Indigenous peoples.

Then, at the end of the decade, Canada’s progressive government issued a fateful “white paper” announcing that it would dissolve colonial-era policies, including reserves, and integrate Indigenous peoples as equal citizens. It was offered as emancipation. 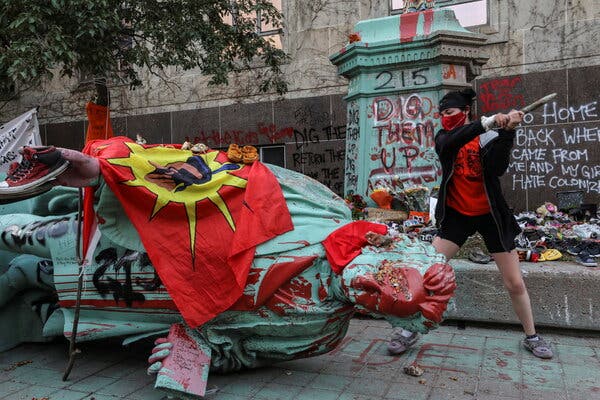 A statue in Toronto of Egerton Ryerson, considered an architect of Canada’s residential indigenous school system, was toppled and defaced during a protest this month.Credit...Chris Helgren/Reuters

To the government’s shock, Indigenous groups angrily rejected the proposal. Like the United Nations declaration, it implied that colonial-era conquests were to be accepted as forgone.

Indigenous leaders gathered in Kamloops to organize a response. British Columbia was a logical choice. Colonial governments had never signed treaties with its original inhabitants, unlike in other parts of Canada, giving special weight to their claim to live under illegal foreign occupation.

“It’s really Quebec and British Columbia that have been the two epicenters, going back to the ’70s,” said Jérémie Gilbert, a human rights lawyer who works with Indigenous groups. Traditions of civil resistance run deep in both.

The Kamloops group began what became a campaign to impress upon the world that they were sovereign peoples with the rights of any nation, often by working through the law.

They linked up with others around the world, holding the first meeting of The World Council of Indigenous Peoples on Vancouver Island. Its first leader, George Manuel, had passed through the Kamloops residential school as a child.

The council’s charter implicitly treated countries like Canada and Australia as foreign powers. It began lobbying the United Nations to recognize Indigenous rights.

It was nearly a decade before the United Nations so much as established a working group. Court systems were little faster. But the group’s ambitions were sweeping.

Legal principles like terra nullius — “nobody’s land” — had long served to justify colonialism. The activists sought to overturn these while, in parallel, establishing a body of Indigenous law.

“The courts are very important because it’s part of trying to develop our jurisprudence,” Dr. Borrows said.

The movement secured a series of court victories that, over decades, stitched together a legal claim to the land, not just as its owners but as sovereign nations. One, in Canada, established that the government had an obligation to settle Indigenous claims to territory. In Australia, the high court backed a man who argued that his family’s centuries-long use of their land superseded the government’s colonial-era conquest.

Activists focused especially on Canada, Australia and New Zealand, which each draw on a legal system inherited from Britain. Laws and rulings in one can become precedent in the others, making them easier to present to the broader world as a global norm.

Irene Watson, an Australian scholar of international Indigenous law and First Nations member, described this effort, in a 2016 book, as “the development of international standards” that would pressure governments to address “the intergenerational impact of colonialism, which is a phenomenon that has never ended.”

The remains of what are presumed to be Indigenous children have been discovered at the sites of defunct boarding schools in Canada. Here’s what you should know:

It might even establish a legal claim to nationhood. But it is the international arena that ultimately confers acceptance on any sovereign state.

By the mid-1990s, the campaign was building momentum.

This period of truth and reconciliation was meant to address the past and, by educating the broader public, create support for further advances.

A sweeping 1996 report, chronicling many of Canada’s darkest moments, was followed by a second investigation, focused on residential schools. Completed 19 years after the first, the Truth and Reconciliation Commission spurred yet more federal policy recommendations and activism, including last month’s discovery at Kamloops. 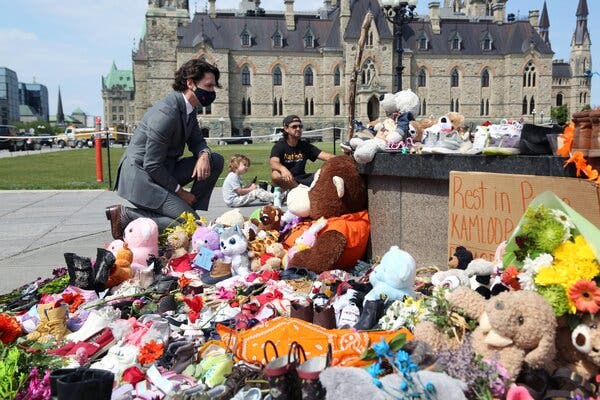 The United States has lagged. Major court rulings have been fewer. The government apologized only in 2010 for “past ill-conceived policies” against Indigenous people and did not acknowledge direct responsibility. Public pressure for reconciliation has been lighter.

Still, efforts are growing. In 2016, activists physically impeded construction of a North Dakota pipeline whose environmental impact, they said, would infringe on Sioux sovereignty. They later persuaded a federal judge to pause the project. 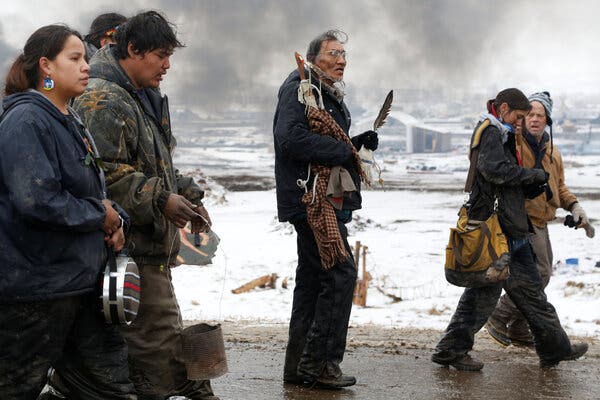 In 2007, after 40 years of maneuvering, the United Nations adopted the declaration on Indigenous rights. Only the United States, Australia, New Zealand and Canada opposed, saying it elevated some Indigenous claims above those of other citizens. All four later reversed their positions.

“The Declaration’s right to self-determination is not a unilateral right to secede,” Dr. Claire Charters, a New Zealand Māori legal expert, wrote in a legal journal. However, its recognition of “Indigenous peoples’ collective land rights” could be “persuasive” in court systems, which often treat such documents as proof of an international legal principle.

Few have sought formal independence. But an Australian group’s 2013 declaration, brought to the United Nations and the International Court of Justice, inspired several others to follow. All failed. But, by demonstrating widening legal precedent and grass roots support, they highlighted that full nationhood is not as unthinkable as it once was.

It may not have seemed like a step in that direction when, in 2019, British Columbia enshrined the U.N. declaration’s terms into provincial law.

But Dr. Borrows called its provisions “quite significant,” including one requiring that the government win affirmative consent from Indigenous communities for policies that affect them. Conservatives and legal scholars have argued it would amount to an Indigenous veto, though Justin Trudeau, Canada’s prime minister, and his liberal government dispute this.

Mr. Trudeau promised to pass a similar law nationally in 2015, but faced objections from energy and resource industries that it would allow Indigenous communities to block projects. He continued trying, and Wednesday’s passage in Parliament all but ensures that Canada will fully adopt the U.N. terms.

Mr. Gilbert said that activists’ current focus is “getting this into the national systems.” Though hardly Indigenous independence, it would bring them closer than any step in generations. 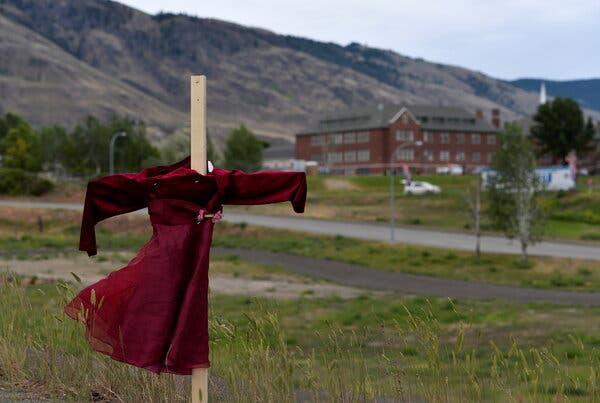 Near the grounds of the former Kamloops Indian Residential School.Credit...Jennifer Gauthier/Reuters

As the past 50 years show, this could help pressure others to follow (New Zealand is considered a prime candidate), paving the way for the next round of gradual but quietly historical advances.

It is why, Mr. Gilbert said, “All the eyes are on Canada.”

Max Fisher is a New York-based international reporter and columnist. He has reported from five continents on conflict, diplomacy, social change and other topics. He writes The Interpreter, a column exploring the ideas and context behind major world events. @Max_Fisher • Facebook