from Scottish independence to London’s mayor, why the UK's local elections matter 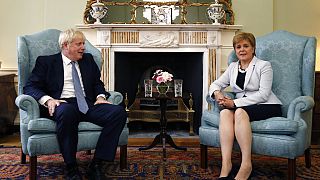 Britain goes to the polls on May 6 in postponed local council elections that will be seen as a key barometer of public satisfaction with Boris Johnson’s Conservative Party and the government’s handling of the COVID-19 pandemic.

A total of 5,000 local council seats will be up for grabs and 13 mayors elected in England, as well as 129 seats in the Scottish parliament, 60 seats in the Welsh parliament and 25 in the London Assembly. There is also a key by-election in the city of Hartlepool.

One of the most fascinating races, however, will be in London, where Mayor Sadiq Khan will defend his seat against Conservative challenger Shaun Bailey, as well as candidates Sian Berry from the Green Party, Luisa Porritt from the Liberal Democrats and a large number of other candidates.

Khan won comfortably in 2016 against Conservative candidate Zac Goldsmith after a bitter election campaign that was marred by accusations of Islamophobia. Khan replaced Johnson, who had served for eight years, as mayor. Goldsmith lost his seat as MP in 2019 but was later awarded a life peerage.

Khan has a comfortable lead in the polls but has been at times rattled by Bailey, a former youth worker who, unlike Goldsmith in 2016, shares the current mayor’s working-class background.

Do the elections matter?

The London mayoral race aside, the Scottish National Party will be hoping to repeat the success it had in 2019 in elections for the Scottish parliament, with Nicola Sturgeon hoping Scottish voters will re-elect her as first minister, a post she has held since 2014.

Sturgeon has made her key election pledge the future of Scotland in the European Union, hoping that an independent Scottish state could rejoin the bloc after the UK left earlier this year. She has promised to hold a new referendum on independence if the SNP wins on Thursday.

A new referendum would undoubtedly be rejected by Johnson’s government.

When it comes to UK councils, it is true that local issues such as rubbish collection and amenities tend to motivate voters rather than ideological lines, but equally, turnout is often lower so it tends to be the politically committed - or the really angry - that cast their vote.

One key issue for voters during council elections is council tax, and how much they pay in their borough. Council tax is not means-tested can be a huge burden for poor and working-class families, Labour and Liberal Democrat councils charge higher rates than Conservative councils.

Who is feeling most confident?

The seats up for grabs on May 6 have not been contested since 2016 and 2017, long before Boris Johnson’s blue-wave saw the Conservatives win a landslide in December 2019.

But Johnson will be hoping that the UK’s extremely successful COVID-19 response and high rates of vaccination - certainly compared to the rest of Europe - will play well for the Conservatives. As will the fact that Johnson has made good on his promise to ‘Get Brexit done’.

But the opposition Labour party has a new leader, having dispensed with the divisive Jeremy Corbyn. Labour will be hoping that Keir Starmer can win back left-of-centre voters that deserted the party over Corbyn’s hard-left stance and issues such as the antisemitism scandal.

The Liberal Democrats also have a new leader, Ed Davey, after its former leader Jo Swinson sensationally lost her seat in East Dunbartonshire during the last general election to the SNP. The Lib Dems will be hoping that can begin to bounce back from the decimation of the party in the 2015 elections when it lost 49 of its 56 parliamentary seats under Nick Clegg.

Council elections are also a rare opportunity for the Green Party, locked out the British parliament due to the first-past-the-post voting system, to flex its muscles in British politics.

As always, council elections often see campaigning by far-right groups. In 2010 a surge of support for the British National Party (BNP) saw them win 54 council seats, but by 2019 the party fielded just two candidates and lost both races.

Why are they being held now?

Despite the UK’s success in vaccinating its population, COVID-19 precautions will be a noticeable factor in the election, with hand sanitiser and plastic screens at polling stations and voters being asked to bring their own pen or pencil to fill out their ballot.

COVID-19 has also led to changes with the proxy voting system, allowing voters that have been exposed to the virus or have symptoms to get an emergency proxy vote until 5 pm on polling day. Due to the challenges of keeping staff protected, results in both London and Scotland may not be revealed until Saturday. However, the Hartlepool by-election result may emerge on Thursday.

Every weekday, Uncovering Europe brings you a European story that goes beyond the headlines. Download the Euronews app to get a daily alert for this **and other **breaking news notifications. It's available on Apple and Android devices.