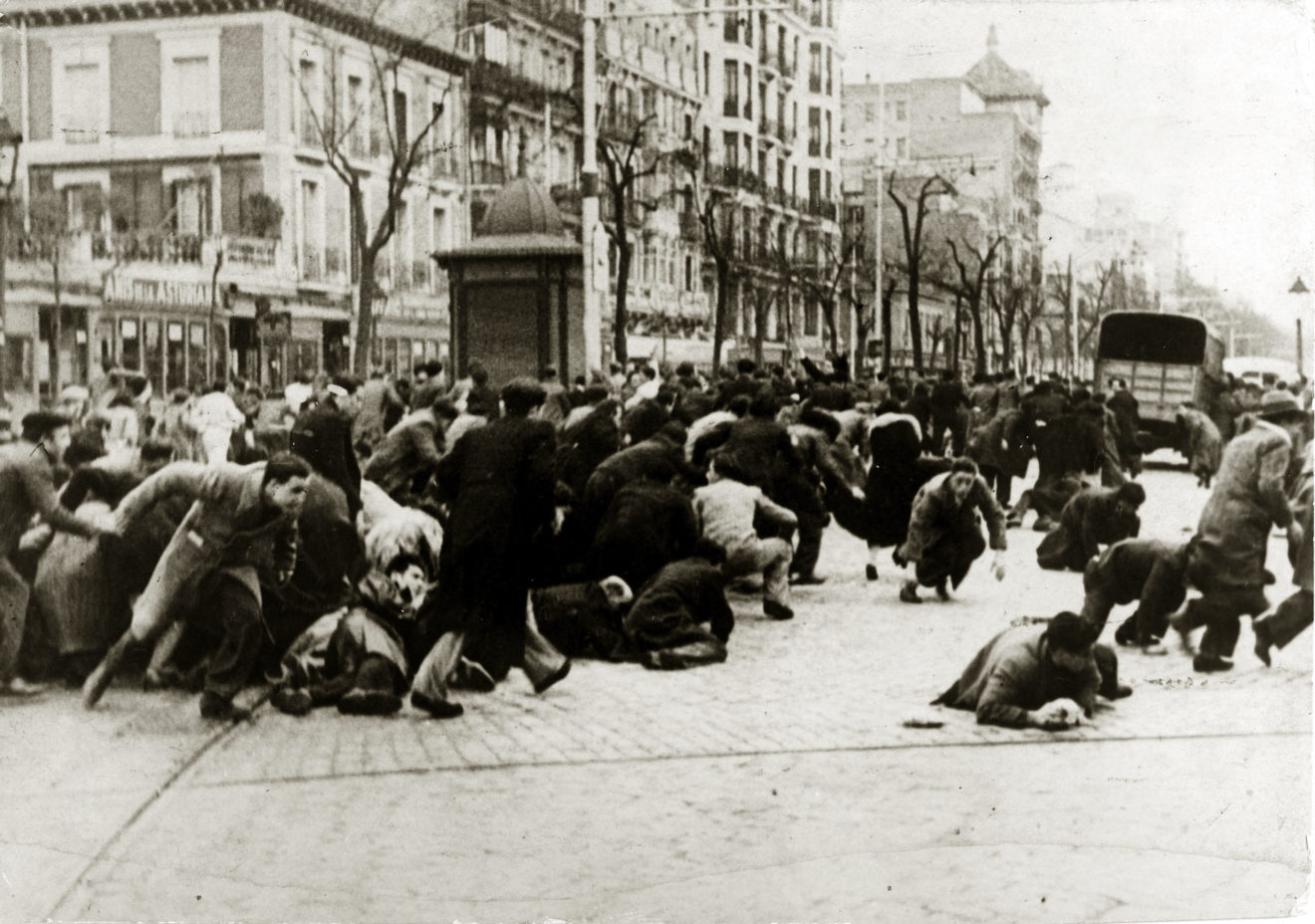 Campaigning in Madrid is packed with bellicose references to the 1930s Civil War | Popperfoto/Getty Images
By Ana Romero
May 3, 2021 nytimes

MADRID — Inside the Prado Museum, there is silence. The voluptuous female bodies painted by Titian and Rubens match the gorgeous springtime in Spain’s capital, recalling pre-pandemic bliss with blue skies, a generous sun and the bright light unique in Southern Europe.

Outside, though, Madrid is in political turmoil, gripped by an election campaign that has polarized the region. There’s violence at rallies, bullets mailed as death threats and campaigning packed with bellicose references to the 1930s Civil War.

Ahead of Tuesday’s election, the region’s conservative incumbent president, Isabel Díaz Ayuso, has targeted Spain’s left-wing government by making the phrase “communism or freedom” her campaign slogan. Leftist parties have rallied to cries of “democracy or fascism.”

That Civil War-style language has some recalling Mark Twain’s quip that while history never repeats itself, “it does often rhyme.”

Aggressive rhetoric from the start of the campaign spilled over into violence at two far-right rallies targeted by anti-fascist activists.

For more polling data from across Europe visit POLITICO Poll of Polls.

Pablo Iglesias, candidate of the far-left Podemos party, last month revealed he’d received a letter containing death threats and bullets, as did Spain’s interior minister and a senior security official. The far-right Vox party suggested he’d made it up.

In order to run in the Madrid elections, Iglesias stepped down in March as deputy prime minister in the coalition government led by Socialist Prime Minister Pedro Sánchez.

The tension reflects high stakes in the Madrid race. The capital region is Spain’s wealthiest and its president traditionally has an outsized voice in national politics.

On the right are Ayuso’s traditionally conservative Popular Party (PP), the center-right Ciudadanos and Vox. Latest polls show them together taking 54 percent of votes. Facing them are Sánchez’s Socialists, the urban left Más Madrid group and Podemos. Collectively, the left is seen winning 44 percent.

The elections were called early after Ayuso dissolved the regional parliament amid rumors she could face a censure vote. Madrid is especially tense because the regional vote could serve as a de facto referendum on how the country is run, said political analyst Pablo Simón.

“In a strategic context, these elections are being held in the main bastion governed by the PP, and the one that has rallied the most against the Sánchez government’s policies, particularly in terms of pandemic management,” he said.

While the presence of national figures like Iglesias has raised the profile of the election, Simón said the highly polarized atmosphere is reflective of trends worldwide — which local politicians had adopted with gusto.

“There’s no Spanish exceptionalism in that sense,” he said. “We’ve seen the same thing happen in the U.K., Italy and the United States.”

The revival of sharply partisan pejoratives has spread around Spain. From morning radio shows to family lunches, terms like facha (short for fascist and used widely to label right-wingers) and rojo (or red, and applied broadly to the left) increasingly fly around.

The vitriol was present on April 18, the first day of the campaign, at a Podemos rally in Lavapiés, a historic downtown neighborhood that’s become a bustling, multicultural barrio.

“Madrid will be the tomb of fascism!” cried Serigne Mbayé from the stage. Mbayé, a 46-year-old Senegalese immigrant who arrived illegally, is a Podemos candidate in the elections.

His family may not have been in Spain during the Civil War, but his rallying cry is pulled from an iconic banner that hung in Madrid’s city center during Franco’s 16-day siege in November 1936. The banner sustained morale as Madrid’s defenders repelled his advancing troops.

Eighty-five years later, Spaniards are acting as if the city is under siege again, calling Tuesday’s elections “the new battle for Madrid.”

Iglesias followed Mbayé onstage, where he spoke in existential terms, invoking the spirit of “No Pasarán!” He applied the anti-Franco slogan meaning “They shall not pass!” to say Madrid again has to stop fascism — this time in the shape of Vox.

“They think Madrid belongs to them,” Iglesias shouted. “They say I’m done, but I say we keep advancing! Yes, we can!”

Historian Agustín Moreno said the fiery terminology runs counter to Spain’s push to silence potentially divisive talk about its violent history as the country moved toward democracy after Franco’s death in 1975.

“The wounds of the Civil War weren’t appropriately treated or closed during our democratic transition, and now it’s the war’s grandchildren — this generation of politicians — that are dredging up what happened back then,” he said.

Iglesias and Ayuso, who were both born on October 17, 1978, are among those grandchildren of the war.

Since taking office in 2019, Ayuso’s policies have mainly been based on headstrong opposition to anything proposed by Sánchez’s national government.

Invoking the “liberty” of madrileños, she disregarded the government’s recommendations to shut down the capital’s vibrant nightlife in response to the pandemic, and has insisted on keeping bars and restaurants open, despite some of the country’s highest COVID-19 infection rates.

Those rates — and a sky-high coronavirus death toll — don’t seem to have dampened Ayuso’s popularity. Polls estimate 40 percent support her and backing is especially high among Madrid’s hospitality and service sector.

“I’m going to vote for her. She helps us and confronts narcissists like Pedro Sánchez,” said Giovanni, an Italian Cabify driver who has lived in Madrid since 1987.

But the regional president also has many detractors.

Gloria, a 92-year-old survivor of the Civil War, said she has always voted Socialist, but this time she would back el Coletas (“the ponytail,” a nickname for Iglesias based on his trademark hairstyle) as the best way to block an Ayuso re-election.

Ayuso’s team brushes away accusations of populism and comparisons between her brash confrontational style with Donald Trump or former Italian premier Silvio Berlusconi. They chalk up her popularity to hard work, a relatable ideology and communications know-how.

If re-elected, Ayuso will be a force to be reckoned with at national level. Commentators speculate she may try to become Spain’s first female prime minister. However, an advisor said Ayuso was in no hurry to take the reins at a higher level, adding that she was still “learning the job.”

“The showdown for Madrid challenges [the] EU behavioural rule to isolate far-right extremists,” said Socialist MEP Juan Fernando López Aguilar. “Ayuso’s PP leaning towards Vox may seem a gain in the short run, but it’ll soon turn out to be self-damaging, for Madrid and Spanish politics, and for the EU altogether.”

As the 1936 Battle of Madrid set off a long siege that was only resolved when the city fell to Franco three years later, many in Spain see the capital’s regional elections as a preview for several years of political drama leading up to 2023, when regional and national elections are due.