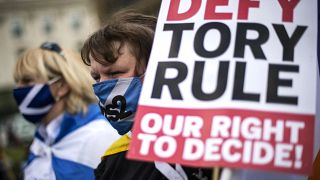 Hundreds gathered for two protests in Glasgow on Saturday, one for Scottish independence from the United Kingdom, and the other pro-Unionists waving Union Jack flags.

The demonstrations in Scotland's capital came just days away from a vote to elect new members of the 129-seat Scottish Parliament at Holyrood.

Independence is again a key issue again for the 6 May election, seven years after a failed vote on breaking away from the UK.

How the COVID-19 pandemic is being handled is also playing a key role in people’s beliefs for both sides.

Speaking at the rally, participant Bob Glenn said the coronavirus pandemic had strengthened his belief Scotland should be able to make more decisions independent of London.

Other demonstrators believe it’s better to be part of a union during such a massive health crisis.

"Because of the catastrophic effects of the pandemic I don't believe this is the right time for Scotland to be splitting away from the UK," argued economist, SJ Brown.

"I just believe we are stronger together - the union can work far better together".

Another pro-union participant, Dionnee Cocozza said being part of the UK allowed Scotland to have the "best of both".

Scots can also now visit other parts of the UK for non-essential reasons.

Her leading pro-independence Scottish National Party (SNP) is hoping an increase in seats from its current 61 could serve as a mandate for another independence vote by the end of 2023.

Alba said it will call for immediate talks on a referendum with the UK government in London as soon as a new Scottish government is formed.

In its manifesto, called "Shake Things Up", Alba promised to propose a motion on the subject in three weeks' time

Alba also called for preparations for a Scottish Central Bank and a new currency for Scotland, as well as a written constitution.

Alba wants an "early and rapid return" to the European single market.

It proposes Scotland join the European Free Trade Association and through this gain admission to the European Economic Area.

Scotland could then decide whether to negotiate for EU membership, it added. A majority of Scots voted against Brexit in 2016.

Alba's independence proposals are more detailed than the SNP's, which has promised to seek voters' backing for a referendum in the first half of the new parliament.

UK Prime Minister Boris Johnson has repeatedly ruled out granting powers for a new vote to be held.

The last referendum in 2014 saw Scots reject independence by 55 per cent to 45 per cent. But a series of opinion polls have indicated increasing support for a breakaway.

If Westminster refuses to allow a fresh vote, Scotland must urgently pass a referendum bill and be ready to fight it in the courts, while applying "diplomatic pressure and international legal action", Alba said.

Scotland's First Minister Nicola Sturgeon said Thursday there would be no "moral justification" for UK Prime Minister Boris Johnson preventing the devolved nation from holding another independence referendum in the next five years.

Sturgeon said in a speech marking the launch of its manifesto, ahead of local elections, that the people of Scotland have the right to decide their own future.

Although the SNP has previously vowed to hold a referendum by the end of 2023, Sturgeon did not detail a specific timeframe and said she would wait until the coronavirus pandemic had eased.

Scotland could become the world’s first ‘rewilding nation’. How did they get here?