BREAKING THIS MORNING: Russian opposition leader Alexei Navalny is unconscious in hospital amid suspicions he was “poisoned with a toxin,” his press secretary Kira Yarmysh tweeted an hour ago. “This morning Navalny was returning to Moscow from Tomsk. On the flight he started feeling ill. The plane made an emergency landing in Omsk,” Yarmysh said. “A year ago, when Alexei was in a detention center, he was poisoned. Obviously, now they’ve done the same thing to him again.”

Yarmysh continued: “We assume that Alexei was poisoned with something mixed into his tea. That was the only thing he drank this morning. The doctors say the toxin was absorbed more quickly because of the hot liquid. Right now Alexei is unconscious. Alexei is in intensive care.”

The prominent opposition leader was reported to be in serious but stable condition in intensive care in Siberia after his flight to Moscow was forced to make an emergency landing. 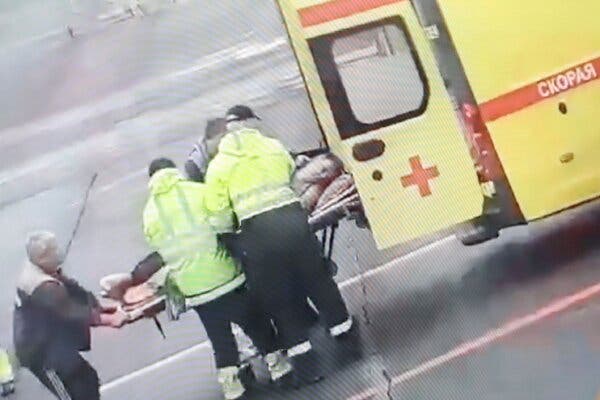 A video posted on social media on Thursday showed Aleksei A. Navalny, Russia’s most prominent opposition leader, being wheeled to an ambulance in Omsk, Russia.Credit...Sergei Chirikov/EPA, via Shutterstock

MOSCOW — Groaning in agony from a suspected poisoning before losing consciousness, the Russian opposition leader Aleksei A. Navalny was rushed to a Siberian hospital on Thursday after the plane he was flying on made an emergency landing because of his sudden illness.

Doctors at the No. 1 Clinical Hospital in Omsk, the Siberian city where the plane landed, initially said that Mr. Navalny, a fierce critic of President Vladimir V. Putin, was on a ventilator in “serious condition” but later reported that his condition, though still grave, had stabilized.

Mr. Putin’s spokesman, Dmitri S. Peskov, told journalists that the Kremlin wished Mr. Navalny a swift recovery, “as we would for any citizen of Russia,” and would, if asked, provide help to get the opposition leader transferred to a hospital abroad.

Mr. Navalny is the latest in a long line of Kremlin opponents to be suddenly afflicted by bizarre and sometimes fatal medical emergencies.

Mr. Navalny’s spokeswoman, Kira Yarmysh, who was traveling with the anticorruption campaigner on a flight destined for Moscow from Tomsk, said on Twitter, “We assume that Aleksei was poisoned with something mixed with his tea.”

Pavel Lebedev, a passenger who posted a picture of Mr. Navalny drinking tea at the Omsk airport before departure, said on Instagram that the opposition activist “went to the toilet at the beginning of the flight and didn’t return. He started feeling very bad. They could barely revive him and he’s still crying out in pain.”

Videos posted by Russian news outlets showed an apparently unconscious Mr. Navalny being wheeled on a gurney to an ambulance waiting on the tarmac at the Omsk airport.

The state-owned news agency Tass quoted an unidentified law enforcement source as saying that the authorities were not yet considering the possibility of a deliberate poisoning. It said that Mr. Navalny could have “taken something himself” before boarding the plane.

Ms. Yarmysh, Mr. Navalny’s spokeswoman, responded on Twitter by asking, “If law enforcement agencies are not looking into intentional poisoning, why are there so many cops in the hospital?”

Anatoly Kalinichenko, a doctor at the Omsk hospital who was interviewed by state television, said poisoning was being considered as a possible cause of Mr. Navalny’s sudden illness.

Yaroslav Ashikhmin, a cardiologist who has served as Mr. Navalny’s personal doctor, told Meduza, a Russian news outlet, that he was trying to get the opposition leader flown from Omsk to a hospital in either Hanover, Germany, or Strasbourg, France, with more experienced toxicology specialists.

Toxicology, he said, is a very specialized field and there are very few institutions that can “handle a patient who has probably been poisoned by some kind of toxin.”

He said he had not seen Mr. Navalny since the latest illness so he could not say whether poison was the cause, but, he added, “it looks like it.”

Mr. Navalny was traveling in Siberia on one of his regular trips to far-flung regions in an effort to expand Russia’s weak and often Moscow-centric opposition movement beyond the capital.

Before boarding his flight in Tomsk on Thursday, Mr. Navalny met with opposition candidates in a coming election for the local council. He arrived in Tomsk from Novosibirsk, Siberia’s largest city, where he had met with his supporters and discussed plans to field independent candidates in a city council election next month.

A Siberian news outlet, Taiga, reported that Mr. Navalny had also filmed an investigative report for his Anti-Corruption Foundation on local officials affiliated with United Russia, a Kremlin-backed political party that dominates most regional parliaments in Russia as well as the national Parliament.

Last year, Mr. Navalny was hospitalized with a “severe allergic reaction” in jail, which his doctor at the time suggested could have been the result of a poisoning, after he was detained for leading an unauthorized election protest.

He had been arrested and sentenced to 30 days in jail for calling a rally to protest a decision by the election authorities to bar several opposition candidates from running for Moscow’s City Council.

Mr. Navalny was doused with a bright green liquid in the Siberian city of Barnaul in 2017 by an unknown assailant who had pretended to shake his hand.

Mr. Navalny later said that a doctor had told him he lost 80 percent of the sight in one eye after suffering a chemical burn from the green liquid. 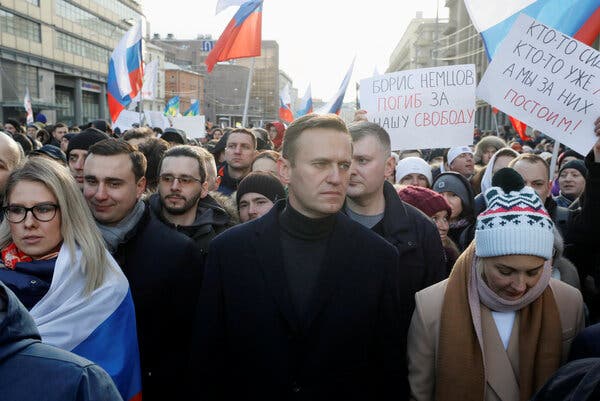 While there was no independent confirmation that Mr. Navalny had been poisoned before falling ill on Thursday, the Russian security services have been suspected of targeting a number of dissidents and others before. Among those are Sergei V. Skripal, a former Russian double agent who was poisoned in England in 2018; Boris Y. Nemtsov, a former deputy prime minister who in 2015 was gunned down in the shadow of the Kremlin; and Alexander V. Litvinenko, a K.G.B. officer turned Kremlin critic who was poisoned in London in 2006.

The Kremlin and its supporters have for years regarded Mr. Navalny as an enemy because of the investigations into graft by officials — including, most vividly, the former prime minister, Dmitri A. Medvedev — carried out by his Anti-Corruption Foundation. Unlike Mr. Putin, who for security reasons almost never uses the internet, Mr. Navalny has exploited social media to mobilize a large following.

Mr. Navalny, who often refers to Mr. Putin as the head of “a party of crooks and thieves,” largely appeals to younger Russians, particularly in larger cities like Moscow, but he has built up a network of offices across the country. Mr. Putin never mentions Mr. Navalny’s name in public, and state-controlled news outlets generally ignore him and his work.

But while feigning indifference, the Kremlin has repeatedly tried to silence Mr. Navalny, jailing him, accusing him of money laundering, and searching the homes and offices of his supporters.

The Russian Justice Ministry last October classified the Anti-Corruption Foundation as a “foreign agent,” a label frequently used by the Kremlin to stigmatize its critics as traitors. 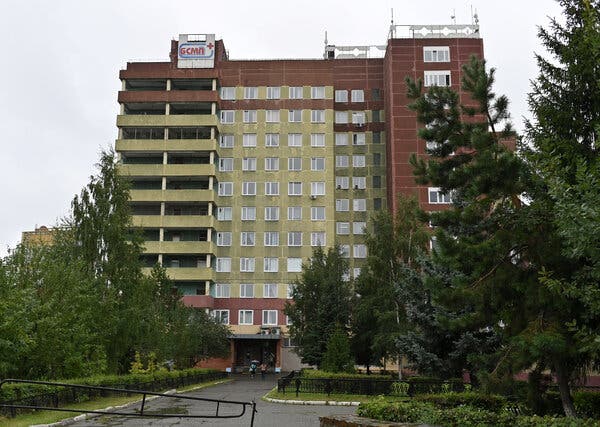 The hospital in Omsk where Mr. Navalny was on a ventilator in intensive care.Credit...Alexey Malgavko/Reuters

Mr. Navalny, like many other Kremlin critics, has reveled in the recent unrest in neighboring Belarus and also in the Russian Far East, seeing a sudden burst of protests in those places as a sign that Moscow, too, will emerge from its long, enforced political slumber under Mr. Putin, now in power for more than two decades.

Mr. Putin recently engineered constitutional changes that remove term limits requiring him to step down in 2024 and allow him to rule potentially until 2036. Mr. Navalny denounced the changes, endorsed in a tightly controlled nationwide vote, as a constitutional coup.

Mr. Navalny announced plans to run against Mr. Putin in the 2018 presidential election, but the authorities blocked his candidacy by entangling him in a criminal case involving corruption charges widely seen as trumped up for political reasons.

Mr. Putin would almost certainly have won any election against Mr. Navalny but wanted to avoid a straight contest that would have forced him to acknowledge the existence of a rival with different ideas.

Each assault on Mr. Navalny’s person and reputation, however, has only reaffirmed his position as the country’s best-known opposition leader and stirred sympathy for him even among those who do not trust or like him. 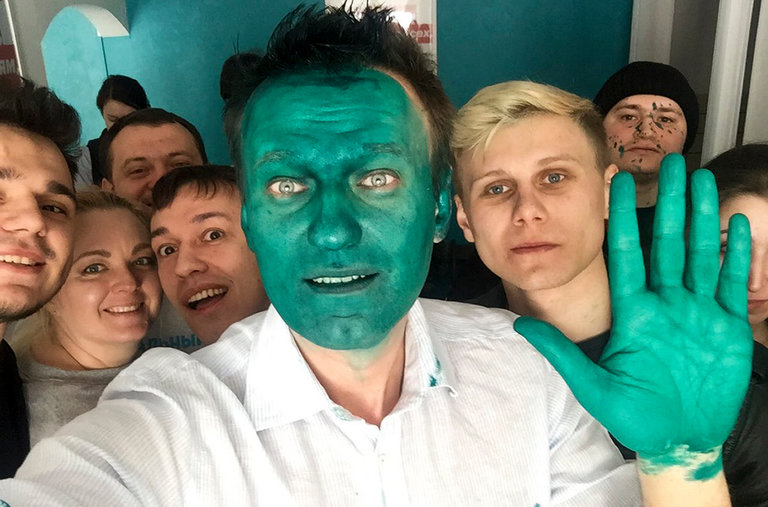 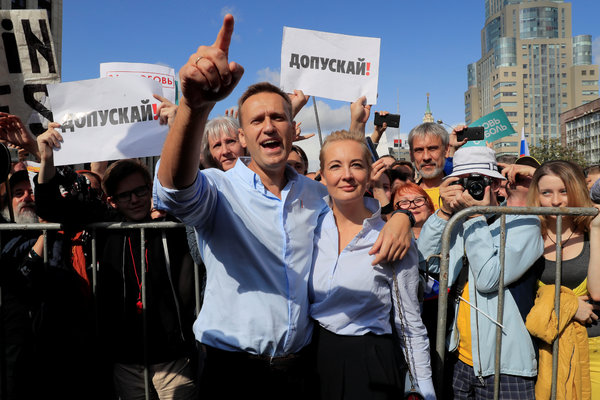 Russians Are Angry, but Putin’s Foes Struggle to Seize the Moment
May 29, 2020 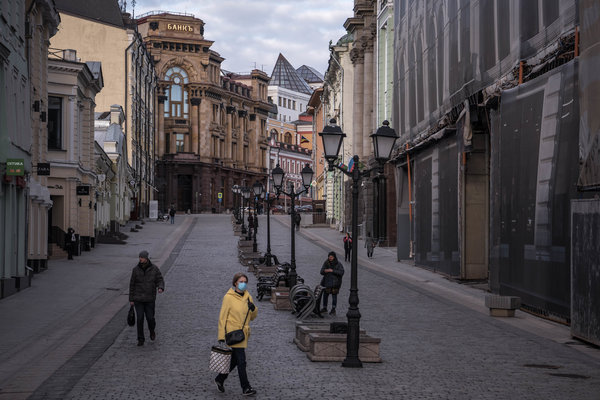 Andrew Higgins is the Moscow bureau chief. He was on the team awarded the 2017 Pulitzer Prize in International Reporting, and led a team that won the same prize in 1999 while he was Moscow bureau chief for The Wall Street Journal.