Tsikhanouskaya says she can be ’national leader' as strikes sweep Belarus 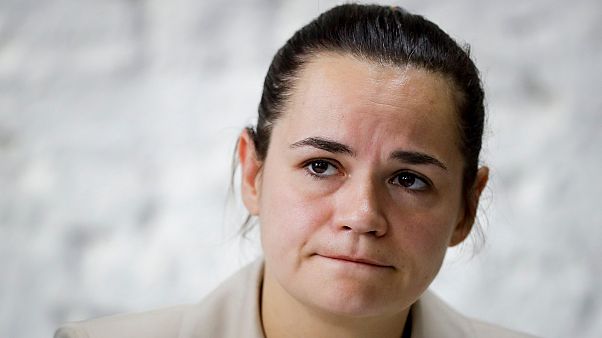 Belarusian opposition candidate Sviatlana Tsikhanouskaya has offered herself as an interim leader for the country after mass protests against President Alexander Lukashenko continued.

The president was jeered and heckled by workers during a factory visit in Minsk on Monday that was intended to shore up support for him.

Thousands of employees have gone on strike at state-run companies, including the Minsk Tractor Plant and the state broadcaster BT, many marching down the streets of the capital.

Government officials had spent the weekend trying to persuade state employees not to abandon their posts.

There have now been nine straight days of protests in Belarus since Lukashenko was declared the winner of the August 9 presidential election with 80% of the vote.

Tsikhanouskaya, who according to official results won just 10%, said in a video released on Monday: "I am ready to assume my responsibilities and act as a national leader."

The 37-year-old fled to neighbouring Lithuania after the election results were declared, saying she feared for her and her children's safety.

She added that she did not "want to become a politician" but that "destiny decreed that I would be on the front line in the face of arbitrariness and injustice."

Workers were filmed appearing to walk out on Monday

As many as 200,000 people were estimated to have attended opposition rallies on Sunday, prompting the European Union to declare it "stands by" the people of Belarus in their demands for change.

"The sheer numbers clearly show that the Belarusian population wants change, and wants it now. The EU stands by them," Foreign Affairs Representative Josep Borrell said in a statement.

An EU summit will be held on Wednesday to discuss sanctions "against those responsible for violence, repression of peaceful protests, and the falsification of election results", he added.

Britain also said it did not accept the results of the election, while US President Donald Trump said the situation in Belarus was "terrible" and that he was watching it closely.

Workers in the factory visited by Lukashenko chanted "go away" and booed him as he tried to address them on Monday.

“Some of you might have got the impression that the government no longer exists, that it has tumbled down. The government will never collapse, you know me well," the 65-year-old former state farm director shouted at them.

“There will be no new election until you kill me.”

But he also appeared to suggest he was open to leaving the presidency and handing over power if constitutional reforms were approved in a referendum.

However, he did not specify what the reforms would involve.

Another opposition leader in Belarus said criminal charges will be filed for police violence against peaceful citizens today.

Maria Kolesnikova, the last remaining opposition figure left in Minsk, said the security forces must be held responsible for the brutal mistreatment of demonstrators and prisoners.

She said around 4,000 people are still in custody.

At least two people died in the demonstrations. The exact cause of death for both men is unclear. Local media reports suggest around 80 people are still missing.

More than 2,000 prisoners were released on Friday, many of whom had severe injuries including: bruises, bloody welts on their backs, lacerations on the head and burns from stun grenades.

The authorities denied allegations of ill-treatment, despite a wealth of photo and video evidence.

“We will not rest until the current rulers resign and Belarus becomes a free country,” Kolesnikova said. "26 years of nightmare have to end."

Belarus on general strike in protest against election results