His decision to leave Spain amid investigations related to his wealth has outraged many Spaniards and caused tensions within the country’s fragile coalition government. 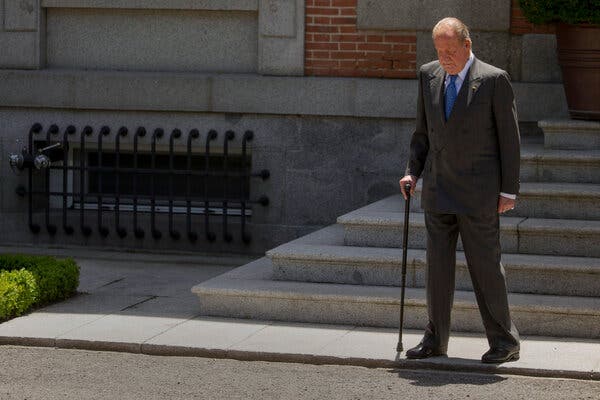 King Juan Carlos in 2014, the year he abdicated. He announced last week that he was leaving Spain.Credit...Andres Kudacki/Associated Press

First he was said to have found a haven with a sugar tycoon in the Dominican Republic. Next, he was reportedly spotted on a friend’s estate in Portugal. Then reports emerged that he was holed up in a luxury hotel suite in Abu Dhabi.

An announcement last week by the former king of Spain, Juan Carlos, that he would be leaving his country amid a raft of investigations related to his wealth has set off frenzied speculation in the Spanish news media about his whereabouts. That has added a layer of intrigue to a royal departure that has shocked many Spaniards and frayed the relationship between the two parties that form Spain’s fragile coalition government.

Prosecutors are investigating whether Juan Carlos — who abdicated in favor of his son Felipe in 2014, after being troubled by health problems and personal scandals — was the beneficiary of a web of offshore foundations and secret bank accounts. Last week, Prime Minister Pedro Sánchez said he had no idea where the former king had gone.

Before Juan Carlos vanished, Mr. Sánchez’s government had been negotiating with the royal household about how the former king should handle his legal situation. 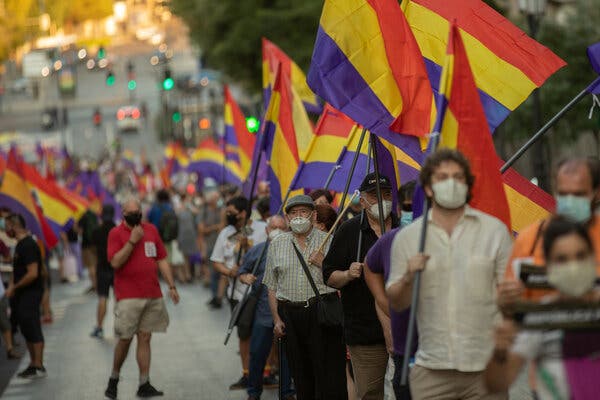 A protest against the Spanish monarchy in Madrid last month.Credit...Manu Fernandez/Associated Press

By abandoning Spain, Juan Carlos gave the impression he was seeking to avoid accountability, said Victor Lapuente, a professor of political science at the University of Gothenburg in Sweden. The support he received from the government “casts a shadow on the already weak perceptions of impartiality of public institutions,” Mr. Lapuente added.

“All parts involved — Juan Carlos, the current King Felipe, and the government — are sending the wrong message: We are not all equal before the law,” Mr. Lapuente said.

A lawyer for Juan Carlos said this month that his client would cooperate with the judiciary if requested to do so. In a letter to his son, King Felipe VI, Juan Carlos suggested that he could help the monarchy by distancing his heir “from the public repercussion that some past events of my private life are generating.” 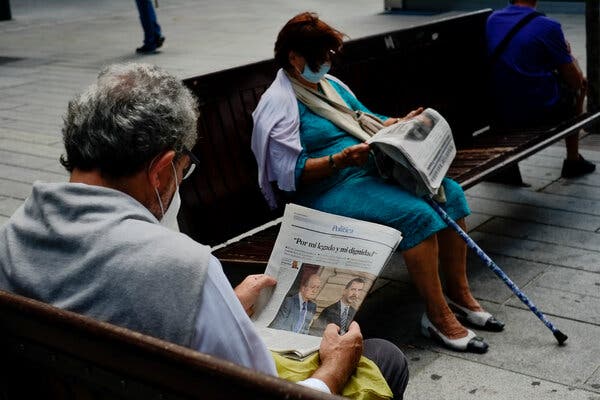 Catching up on the news about Juan Carlos earlier this month in Pamplona. The hunt for his whereabouts has set off a media frenzy in Spain.Credit...Alvaro Barrientos/Associated Press

This month, politicians from Spain’s main establishment parties closed ranks around King Felipe, while defending the legacy of his father and the presumption of his innocence. Mr. Sánchez, the prime minister, said it was important “to judge people, not institutions.”

Mr. Sánchez, however, has been feeling pressure from within his coalition. Since January, his Socialists have governed alongside a far-left party, Unidas Podemos, that wants Spain to end the monarchy. Pablo Iglesias, the leader of Unidas Podemos and Spain’s deputy prime minister, said Juan Carlos had fled Spain, calling it “an act unworthy of a former head of state.”

The criticism from Mr. Iglesias has been echoed by regional parties that have long wanted Parliament to investigate the wealth of the former monarch. After Juan Carlos left, Quim Torra, the separatist leader of the region of Catalonia, called on King Felipe VI to abdicate for helping his father leave.

The opacity surrounding the whereabouts of Juan Carlos has also led to differing interpretations in Spain’s polarized political culture. Some conservative newspapers have suggested that Juan Carlos was on a summer vacation abroad and would soon return. 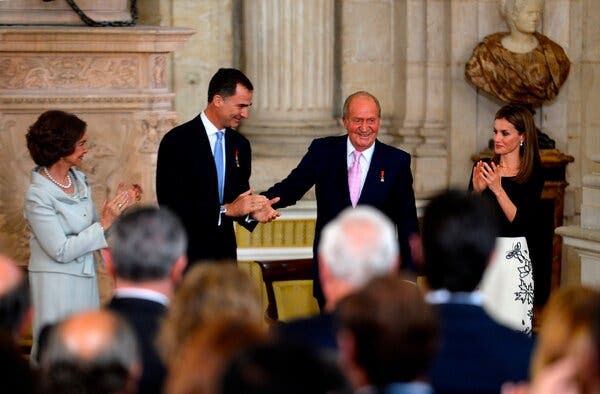 “Juan Carlos has not gone into exile, but instead he has left Spain for a period of time, to give some margin for the situation to calm down,” José Antonio Yturriaga, a former Spanish ambassador, wrote in a newsletter this week.

Mr. Yturriaga said detractors of Juan Carlos failed to differentiate between the monarch’s personal life and his public contributions. He contrasted the former king’s recent problems with his role in consolidating Spain’s return to democracy after the death of the dictator Gen. Francisco Franco in 1975.

“Don Juan Carlos was a great king in the Spain of the 20th century, but he did not manage to find his place in that of the 21st century,” Mr. Yturriaga said.

A public prosecutor in Geneva is investigating Swiss bank accounts held by two offshore foundations that were set up and managed by people close to Juan Carlos. One of the foundations, the Panama-based Lucum, received $100 million from Saudi Arabia in 2008. Prosecutors are trying to establish whether the money was connected to a high-speed train contract that Spanish companies received to link the Saudi cities of Medina and Mecca.

Juan Carlos has not himself been placed under investigation in Switzerland. King Felipe said in March that he had cut his own ties with Lucum after he was named as a beneficiary of the fund. Based in part on information shared by the Swiss, prosecutors in Spain are now also investigating the Saudi train contract.

In 2013, the conservative Popular Party that then governed Spain blocked attempts in Parliament by smaller parties to get information about how Juan Carlos had inherited money from his father. 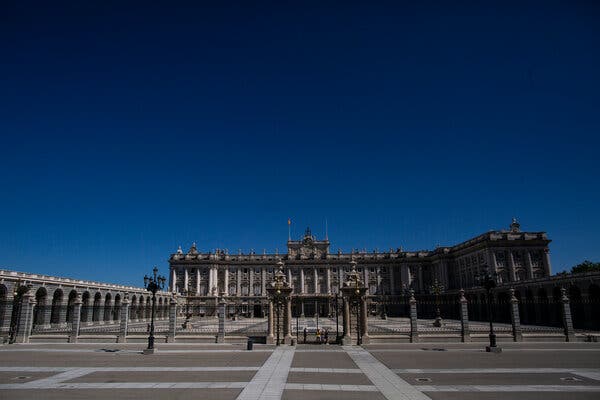 But since Mr. Sánchez took office in 2018, his party has also sided with right-wing lawmakers to block requests in Parliament from left-wing and regional lawmakers to investigate the former monarch’s wealth.

After Juan Carlos abdicated in 2014, the conservative government at the time decided that he should maintain his honorary title of king, giving him legal immunity relating to any events that occurred before his abdication.

Whatever prosecutors decide, José Álvarez Junco, a leading historian of Spain, said it was hard to understand the recent personal choices made by the former king.

“What need did Juan Carlos I have to commit the series of mistakes that have led him to this lamentable ending,” Mr. Álvarez Junco asked in a column published Sunday in the newspaper El País. 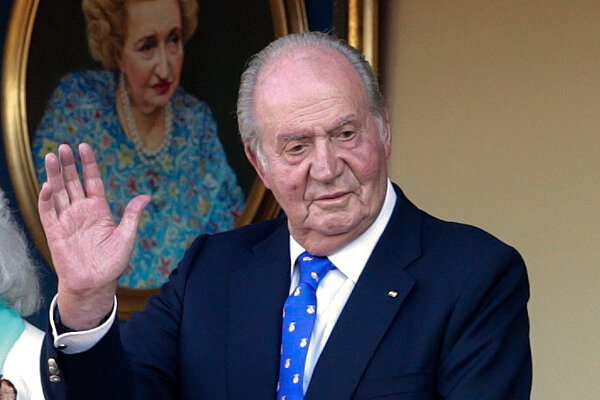 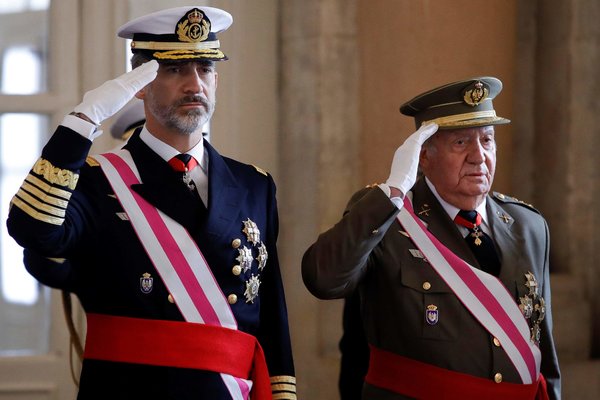 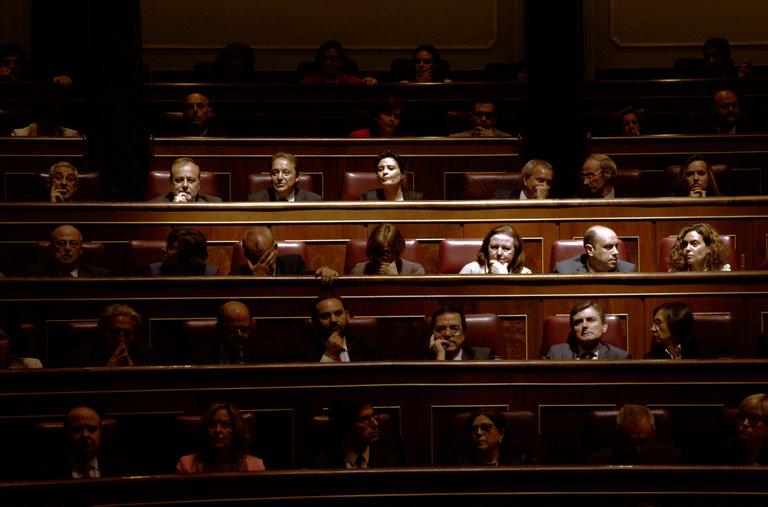 A version of this article appears in print on

, Section A, Page 11 of the New York edition with the headline: Spain Reels as Former King Vanishes in Face of Scandals.