What Just Blew Up In Beirut?

Nick is an ex-British Army officer and open source analyst. He has a special interest in the conflicts in Syria, as well as social media, civil society, intelligence and security. Contact via Twitter: @N_Waters89

Shortly before 6 PM Beirut time reports began flooding Twitter of a fire and a series of explosions in Beirut. It rapidly became evident that event was far more than a small industrial fire. 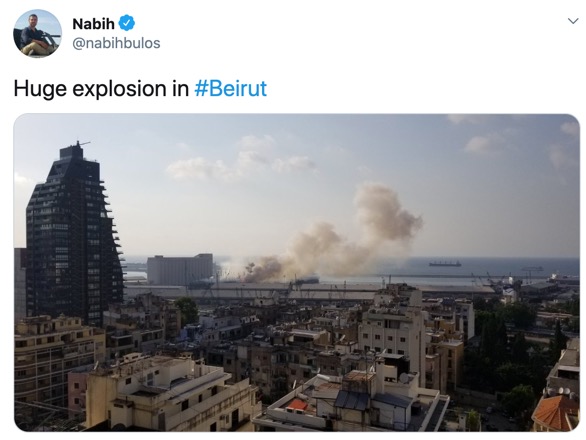 Shortly after, videos and images of a vast explosion flooded onto social media. The video below is a clear example, showing a fire, suddenly transforming into a vast fireball and a shockwave which ripped buildings apart.

Where did the explosion happen?

The videos and images of this event all focus on a single location on the docks in Beirut at 33.901353, 35.518835. Although there were claims of explosions at other locations, there does not appear to be images or videos of this, and it is likely these reports were simply a result of the vast explosion at the docks. 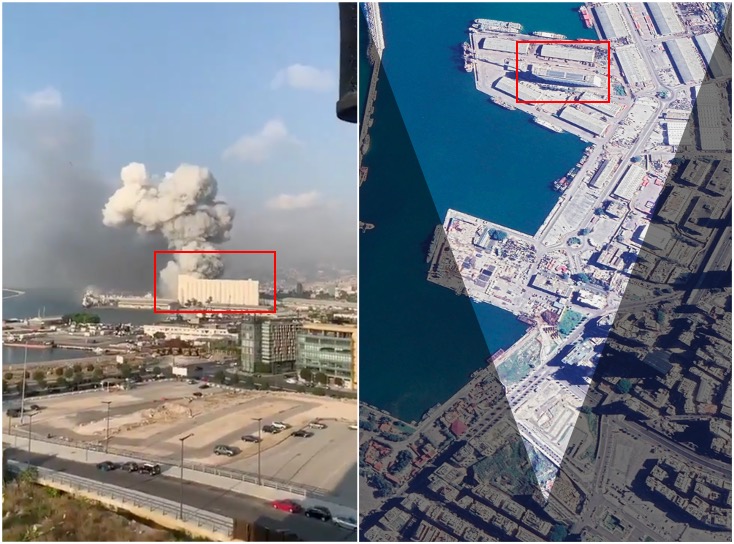 Although there were some claims that this explosion could have been a ship, or indeed an airstrike, nothing in open source videos suggest this was the case. Multiple images and videos show a warehouse on fire and several smaller explosions shortly before a gigantic detonation. The video below captures this in detail.

In the video above, the epicenter of the blast appears to be a warehouse on the dock located at 33.901353, 35.519006. Some users on social media have referred to this as “warehouse 12“. Note that the Beirut Port Silos to the west (left) do not appear to be the initial source of this detonation.

This appears to be supported by a video filmed from the the roof of the Beirut Port Silos which show this warehouse on fire, shortly followed by an explosion. Due to the size of the explosion seen on the video below, it seems unlikely this was the largest explosion, but rather some of the smaller initial detonations.

Left: still from video, Right: image tagged to this location on Google Maps

We can also see a distinctive wire or tube running down onto the building on which the person who is filming is standing. Using this we can place their exact location as 33.901750, 35.518238, about 40 meters away from the warehouse. This also confirms that they are filming the north side of the warehouse at 33.901353, 35.519006, which appears to be on fire. 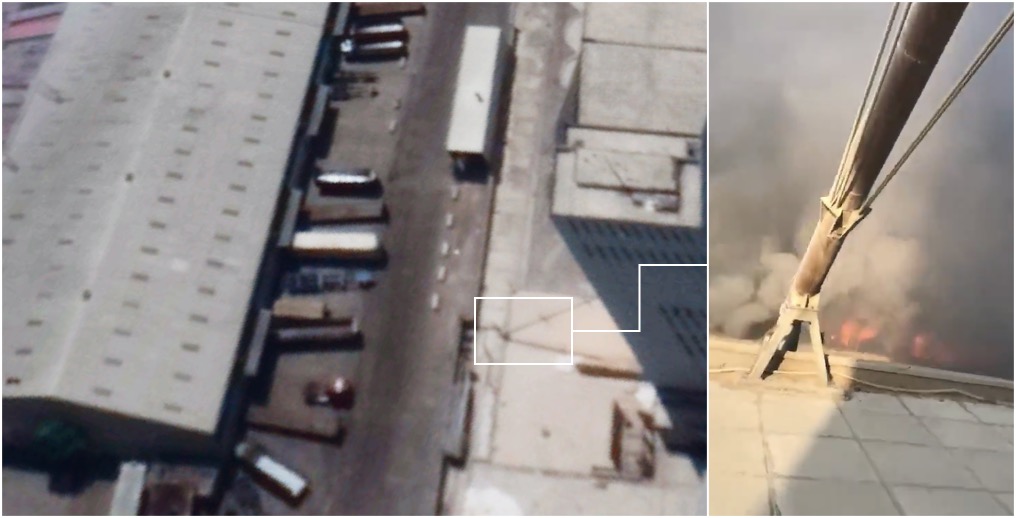 Due to the power of the large explosion, which we will expand upon below, we do not believe this video shows the largest detonation.

What caused the explosion?

There has been some speculation about the cause of this blast. Notable features of this explosion include a reddish cloud and a large number of small flashes visible in the fire before the large explosion. Some local media accounts posted claims that explosive material had been improperly stored at this location, however those Tweets were later deleted. Others pointed to a large shipment of Ammonium Nitrate that may have been offloaded at the docks several years ago. At this point in time there is no clear indication of what may have been the primary cause of this blast.

We can, however, say that it was most certainly not a nuclear detonation.

Shortly after we first published this article, the Lebanese Prime Minister Hassan Diab stated “Facts about this dangerous warehouse that has been there since 2014 will be announced and I will not preempt the investigations.”

What damage was done?

This explosion was clearly gigantic. There are significant amounts of images and videos showing huge amounts of Beirut have sustained severe damage. The video below, a slowed version of one of those taken on the ground, clearly shows parts of buildings disintegrating as the shockwave hits them.

Indeed, this shockwave appears to have reached Cyprus. Various social media accounts posted about this, and we received at least one report that the shockwave had shaken windows there. Interestingly, seismic monitoring data at various locations identified a blip at this time, and a 3.5 magnitude earthquake was registered in Beirut.

However large it was, this explosion has devastated swathes of Beirut. As well as structural damage near to the epicenter, the shockwave shattered windows and smashed down doors kilometres away.

View of the docks from the south west

Due to the fire and smaller explosions, many people in Beirut would have been standing by windows recording the scene. As the blast hit, many of these people would have been hit by flying glass, including their own shattered windows. It is therefore unsurprising that hospitals appear to be overwhelmed by the number of casualties this blast has caused. At the time of writing initial casualty estimates indicated 50 dead and several thousand wounded.

From the available information it is clear that shortly before 6 PM in Beirut a fire and series of explosions at the docks in Beirut set off a gigantic explosion, the effects of which were felt as far away as Cyprus. Damage is widespread around the city and thousands are reported to have been wounded. Although the exact cause of the detonation is still currently unknown, the epicenter appears to have been the warehouse at 33.901353, 35.518835.

This explosion is one more layer of misery on a country suffering under severe economic conditions, inflation and frequent power-cuts.  No doubt there will now be a large amount of interest about exactly what was stored in that warehouse, and why something so dangerous was being stored so close to the center of such a bustling city.