The government declared a state of emergency Friday, days after it allowed mass gatherings in the capital and cases jumped to 4,200. 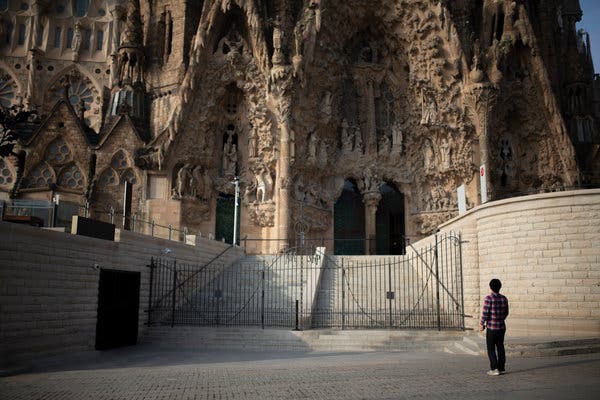 The Sagrada Familia basilica in Barcelona shut its doors to visitors on Friday.Credit...Joan Mateu/Associated Press

Now Spain has the second-highest number of coronavirus infections of any European country, after Italy — overtaking the larger nations of France and Germany — and faces the fastest spreading contagion on the Continent.

Between last weekend and Friday, the number of cases in the country shot from several hundred to 4,200, with 120 deaths, and the prime minister warned that the number of cases could reach 10,000 by next week. That would give Spain one of the fastest rates of coronavirus contagion in the world.

The government declared a state of emergency.

THE LATEST
Read our live global coverage of the coronavirus outbreak.

Spain’s initial, seemingly blasé approach to the virus and its failure to take mitigating steps sooner is facing sharp criticism. And coming on the heels of the crisis in northern Italy, where a slow response allowed the virus to overwhelm the health care system, Spain’s experience once again underscores the necessity for governments to take strict measures early to combat the virus’s spread.

It may also prove to be the latest warning to governments that have resisted imposing tough restrictions before a spike in cases brings on a crushing public health crisis. 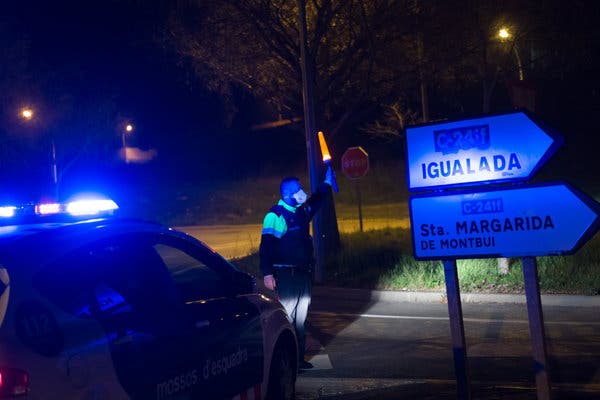 A police officer blocked the road to Igualada on Thursday, one of the four towns in northeastern Spain that have been locked down.Credit...Samuel Aranda for The New York Times

On Thursday, Prime Minister Boris Johnson of Britain, while acknowledging that ‘‘many more families are going to lose loved ones,’’ took a notably restrained set of measures, even as British medical officials estimated the number of infected people in the country was already between 5,000 and 10,000.

In Spain, after defending the decision to let mass gatherings go on, Prime Minister Pedro Sánchez warned on Friday that Spain was “facing very difficult weeks.” Two ministers in his cabinet have already tested positive, and he and the rest of the cabinet are now being tested.

While there have been significant outbreaks in Basque and Catalan towns, the Madrid region has become the epicenter of Spain’s crisis. By Wednesday, Madrid accounted for about half of the cases and almost two-thirds of the fatalities.

Get an informed guide to the global outbreak with our daily coronavirus newsletter.

All Madrid schools and universities have now been shuttered for at least 14 days, with other regions later following suit. Catalonia, the region in northeastern Spain, said late Friday that it would start to “restrict entrances and departures” though it did not offer details.

On Thursday, three of the politicians who led last weekend’s events tested positive for coronavirus, raising questions about whether those in charge in Spain had actually helped spread the virus, rather than halt it.

The far-right Vox party apologized to its followers for holding its Madrid meeting, while both the leader and the secretary general of Vox tested positive for coronavirus. 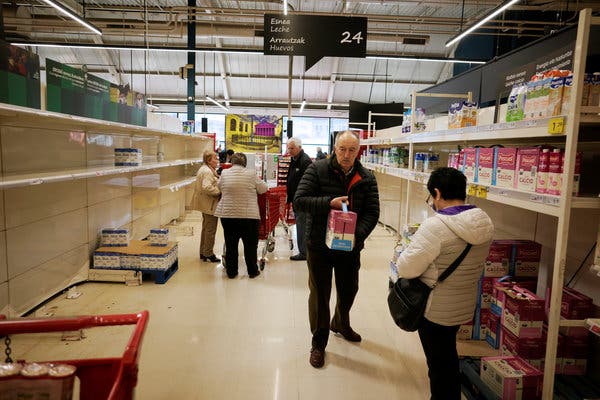 Empty shelves at a grocery store in Guernica, in the Basque region.Credit...Vincent West/Reuters

The rapid worsening of the situation in Spain has now heightened the political bickering in a country that was already deeply polarized.

Shortly after Mr. Sánchez spoke on Friday, Pablo Casado, the leader of the main opposition Popular Party, said his group would support extending the state of emergency beyond the initial 15 days, if needed.

But he also took a direct swipe at Mr. Sánchez, saying his government “should start leading.” Mr. Casado added, “During the last weeks, the government has made serious mistakes.” It’s time, he said, to “show firmness and determination.”

Until Friday, the Spanish authorities had avoided sweeping measures that could spook people.

Only a day earlier, in a news conference on Thursday that was held by video link while he and his cabinet members underwent coronavirus testing, Mr. Sánchez skirted questions about a state of emergency. He dismissed suggestions that the Spanish authorities had been underestimating the health threat. 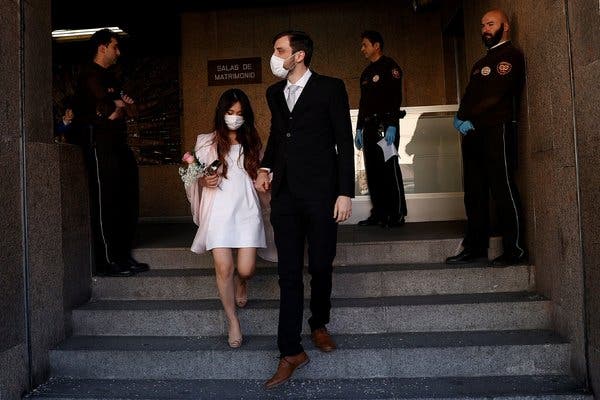 Newlyweds leaving a civil registry in Madrid on Friday. The city’s local authorities decreed that all wedding ceremonies must be held behind closed doors.Credit...Chema Moya/EPA, via Shutterstock

While recognizing that there was no “instruction manual” to deal with this kind of health crisis, Mr. Sánchez said he could offer “a message of calm, serenity, unity and above all trust in those who know how to contain the extension of this virus.”

Yet some Spanish medical specialists believe his reassuring tone was overdone.

Ángela Hernández Puente, a doctor who is the deputy secretary general of a Madrid health sector labor union, said in a phone interview that “Spain has until now handled this crisis with a certain level of complacency — and certainly not energetically enough.’’

‘‘Instead of letting professionals lead the work, politicians have got in the way,’’ she said. ‘‘I’ve seen more a blame game between them than coordination.”

Some criticism has also come from outside Spain, notably Italy.

Walter Ricciardi, one of Italy’s top health experts, said it was “madness” that women had been allowed to march through Madrid last weekend.

“These big rallies do a favor to the virus, instead of obstructing it,” Dr. Ricciardi said in an interview with the Spanish newspaper ABC. “We have been saying that Italy was only the first European country that was affected, but that this would then happen to the other countries as well.” 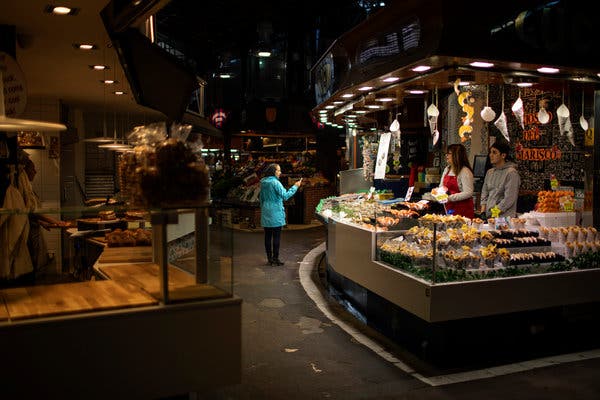 While Spain has long been praised for having one of Europe’s most advanced public health systems, Madrid hospitals are scrambling to find more face masks and add beds to cope with the growing rate of coronavirus cases.

At Madrid’s La Paz hospital, the gym has been turned into a makeshift sleeping area. In the Catalan town of Igualada, which is under lockdown, the mayor described the situation in the local hospital as “desperate.”

Part of the challenge in Spain is that health care is largely in the hands of regional administrations rather than the central government.

While Mr. Sánchez has been stressing the strong level of cooperation with regional politicians, tensions are emerging. It has not helped that he leads a left-wing minority coalition government that barely scraped into office earlier this year, after inconclusive elections.

“We have a very good Spanish health system, but we have the problem that it is fragmented between 17 regions and under the control of politicians who often do not wear the same party colors,” said Ms. Hernández Puente, the health labor union official. 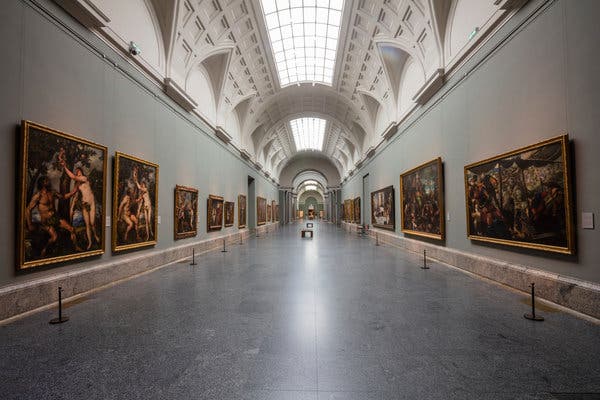 An empty gallery at El Prado Museum in Madrid on Thursday.Credit...Bernat Armangue/Associated Press

The state of emergency will come into force Saturday, but it’s unclear how far it will stretch.

As in Italy, there are concerns about tightening the screw too far on the movement of people in Spain, which is heavily reliant on its services industry, particularly a tourism sector that accounts for 12 percent of Spain’s gross domestic product.

In a report published Friday, academics from the Esade university warned that the economic impact of coronavirus on Spain “will be more severe than in other countries because of its economic structure.”

Even as Spain prepares its state of emergency, Mr. Sánchez has continued to emphasize that Spain should coordinate its response to coronavirus with its European Union partners. So far those responses have been diffuse.

As a Socialist leader, Mr. Sánchez has also sounded acutely aware of what he learned from the euro debt crisis, when countries like Spain imposed stringent budget cuts and austerity measures. 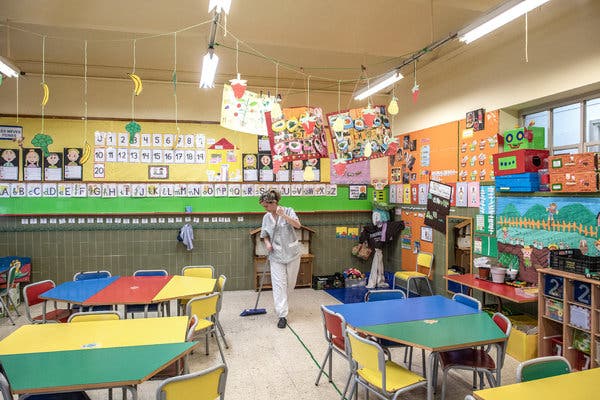 An empty classroom in Barcelona was cleaned on Thursday after schools and universities there closed to contain the virus.Credit...David Ramos/Getty Images
The Coronavirus Crisis
Italy’s Health Care System Groans Under Coronavirus — a Warning to the World
March 12, 2020 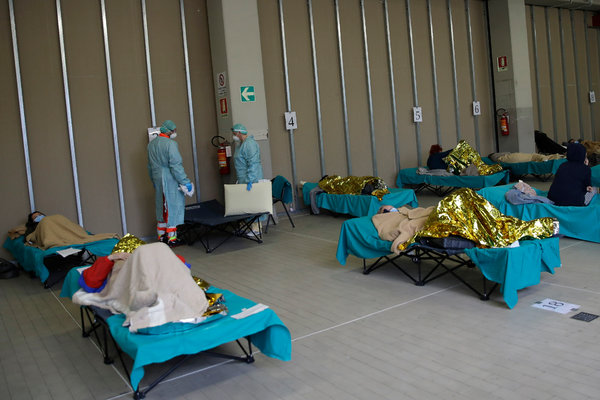 A Fumbled Global Response to the Virus in a Leadership Void
March 11, 2020