Foreign Policy: "There’s a Solution to Catalonia’s Crisis. Spain’s King Is Standing in the Way." 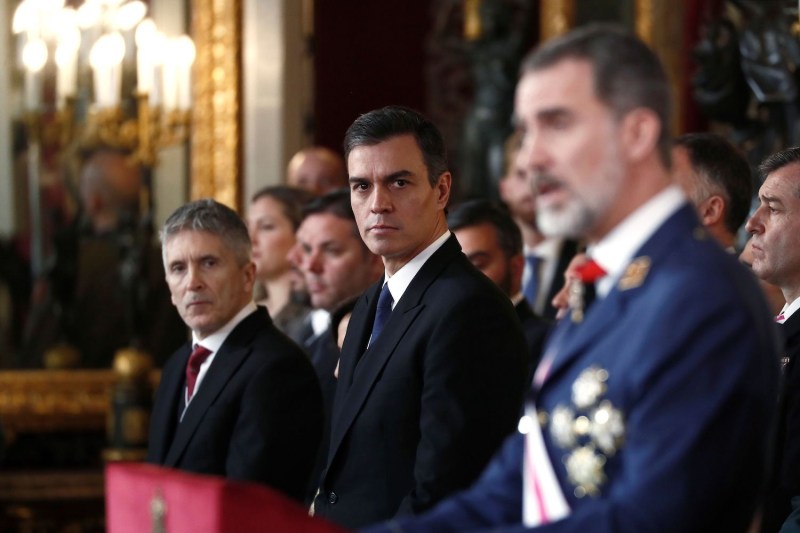 “We have no king.” So declared almost 50 politicians from pro-independence parties from Galicia, the Basque Country, and Catalonia on Feb. 3, as they boycotted the opening of the new parliamentary session in Madrid. King Felipe VI, who took the throne in June 2014 after the abdication of his father Juan Carlos I, heads an “anachronistic institution that is … based on the goal of maintaining and imposing the unity of Spain and its laws,” said Gabriel Rufián, a provocative, outspoken member of the pro-independence Republican Left of Catalonia.

According to the 1978 constitution, Spain’s king is the embodiment of the country’s “unity and permanence”; yet he is also described as the figure who “arbitrates and moderates” its political institutions. The Catalan independence movement has forced the king to face the dilemma of how to balance these two obligations, and highlighted the conflict between the constitution’s commitment to the  “indissoluble unity” of Spain and the right to self-governance of so-called historical regions such as Catalonia.

After trying and failing to ignore the northeastern region’s separatists, Spain’s new leftist coalition is now engaging them. Socialist Prime Minister Pedro Sánchez is attempting to preserve unity through moderation and dialogue, rather than retreating behind a firewall of inflexibility—the approach taken by Sánchez’s conservative predecessor Mariano Rajoy, with the tacit endorsement of Felipe. But the Spanish monarch’s brief intervention in the Catalonia drama suggests that Felipe has yet to grasp the inadequacy of inflexibility when it comes to dealing with the region’s independence movement.

King Felipe’s intervention in the Catalonia drama suggests that Felipe has yet to grasp the inadequacy of inflexibility when it comes to dealing with the region’s independence movement.

On Oct. 1, 2017, then Catalan President Carles Puigdemont held an independence referendum deemed illegal in advance by Spain’s Constitutional Court. Out of a turnout of 43 percent, 92 percent voted for independence, despite the presence of national police deployed by Rajoy to shut down polling booths. Images of voters bleeding from facial cuts and being dragged away by baton-wielding policemen appeared in media outlets throughout the world, doing little to enhance Spain’s international reputation.

In a rare foray into politics, Felipe addressed the nation on Oct. 3, the day that pro-independence protesters brought Barcelona to a halt with a general strike. He condemned Catalan separatists as “reckless,” claiming that their actions had placed them “outside the law and outside democracy.”

Felipe didn’t explicitly mention Rajoy’s brutal tactics, far less condemn them; instead, he used the barely veiled rhetoric of monarchs who choose to intervene in politics. “The legitimate powers of the state have the responsibility to guarantee constitutional order and normal functioning of the institutions,” he said. This carefully worded vagueness brought to mind Queen Elizabeth II’s remark to a well-wisher in Scotland in September 2014, days before the Scottish independence referendum: When she said that she hoped people would “think very carefully about the future” before voting, it was widely interpreted as a boost for the unionist camp.

Sánchez’s meeting with Catalan President Quim Torra on Feb. 6, just three days after separatists snubbed the king at the opening of parliament, might signal a new phase in relations between Madrid and Barcelona. The prime minister traveled to the Catalan capital—itself a symbolic move—for a meeting which he said would enable the two governments to “restart the dialogue at the point where our paths diverged.”

That acrimonious divergence occurred last October, when Spain’s Supreme Court sentenced nine leading separatists to between nine and 13 years in prison for organizing the 2017 referendum. At the time, Sánchez said the process resulting in their imprisonment had been “exemplary” and declined Torra’s repeated requests for a meeting and that the jailed politicians be granted an amnesty.

Although one poll put Felipe’s popularity at a record high in late 2017, his Oct. 3 address only seemed to spur separatists on.

The apparent cordiality of the Feb. 6 meeting masked these unresolved issues and ongoing tensions. The Catalan president is a committed secessionist and insists that his region be allowed a legal referendum on independence, to which Sánchez remains firmly opposed. In fact, Torra might not even be running Catalonia for much longer: He awaits a Supreme Court decision on his appeal against a charge of disobedience, made by the Catalan regional High Court of Justice, which could bar him from public office for 18 months.

The continuing negotiations, forced upon the Socialist leader by the Republican Left of Catalonia in return for its abstention at his investiture in January, has also placed Sánchez in an awkward position of reliance on Catalan separatists to stay in power. Still, any attempt at dialogue, no matter how complex, trumps the zero-tolerance approach favored by Rajoy and implicitly endorsed by the king.

Although one poll put Felipe’s popularity at a record high in late 2017, his Oct. 3 address only seemed to spur separatists on. The pro-independence regional government redoubled its efforts and unilaterally declared a Catalan Republic on Oct. 27. This prompted Rajoy to activate Article 155 of the constitution and impose direct rule over Catalonia the very next day—an unprecedented move described by Carme Forcadell, former speaker of the Catalan parliament, as a “de facto coup d’état” (Forcadell is now serving an 11-year prison sentence for her role in organizing the 2017 referendum.)

On Dec. 24, 2017—three days after Catalan separatists won a parliamentary majority in their regional election—Felipe gave his annual televised Christmas speech. The tenor was less combative than that of the previous address, yet the king’s fundamental stance regarding Catalonia appeared unchanged. 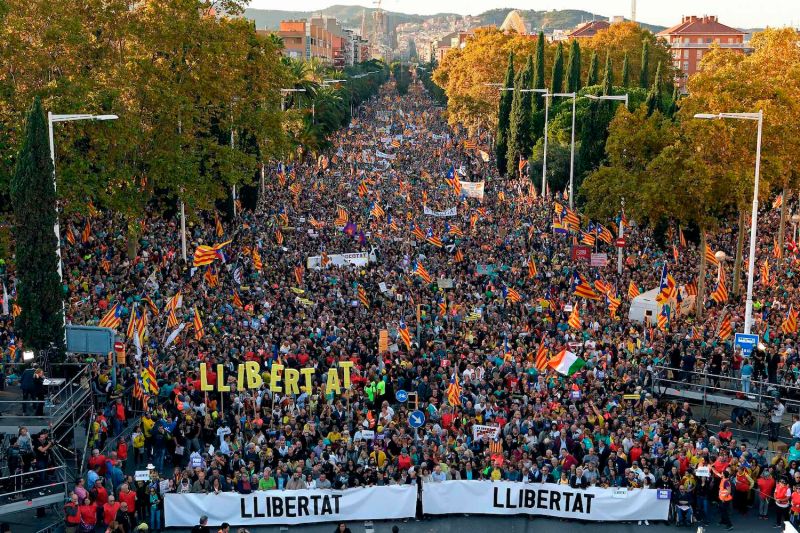 Tough Talk on Catalonia Might Win an Election, but It Won’t Unite Spain

Pedro Sánchez has turned up the heat on Catalan separatists in the hope of winning on Nov. 10, but his rhetoric and the Supreme Court’s harsh sentences of separatist leaders will only strengthen the secessionist movement. 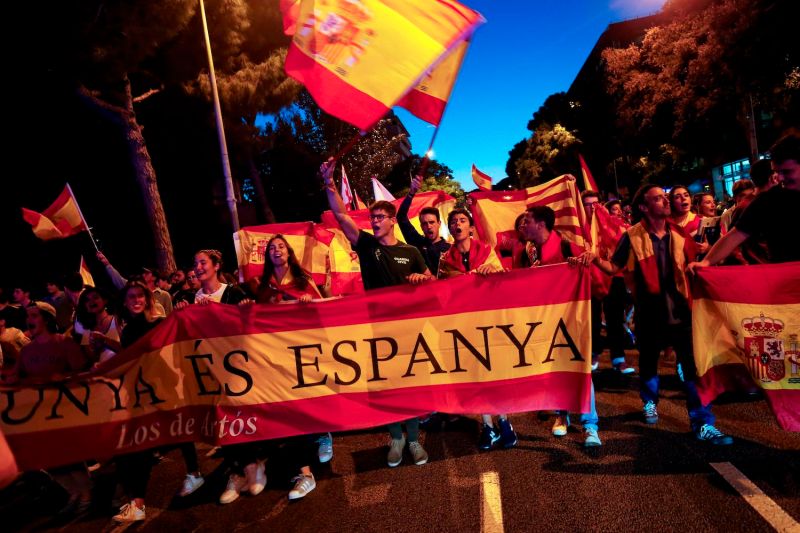 The Spanish Supreme Court isn’t trying to make an example of Catalan secessionist leaders by handing down tough sentences. It is merely upholding the country’s constitution.

Did Madrid Score an Own Goal in the Catalan Referendum?

Spain’s heavy-handed response may have actually shored up support for Catalan independence.

More recently, in his 2019 Christmas speech, Felipe also made oblique references to the battle between separatists and nationalists, describing Spain’s Constitution as a document that “recognizes our defining territorial diversity and that preserves the unity that gives us strength.” What seemed to some listeners an attempt to appeal to both camps and urge them toward some kind of compromise did not go over well in Barcelona.

Roger Torrent, the pro-independence speaker of the Catalan Parliament, wasn’t buying it: “Catalonia is not the problem,” he said: “A state that does not know how to give a political and democratic response is.” When the king visited Barcelona recently, in November 2019, pro-independence protesters burned his photograph in streetside bonfires. “Catalonia has no king,” they chanted.

When the king visited Barcelona recently, in November 2019, pro-independence protesters burned his photograph in streetside bonfires. “Catalonia has no king,” they chanted.

Judging by the recent anti-monarchy demonstrations in Barcelona, Rufián wasn’t exaggerating when he said that Felipe is seen as an anachronism in Catalonia, at least among the region’s separatists. But recent surveys and statistics regarding the monarchy’s overall popularity in Spain present conflicting pictures. According to a poll by SocioMetrica for El Español in December 2016, 61 percent of Spaniards approve of the monarchy as a whole and 72 percent of Felipe specifically.

Yet that was ten months before the king’s intervention in the Catalonia drama, since which time it seems as if opinion may be changing. In a poll carried out in late October 2017, a few weeks after the referendum, 60 percent of Catalans said they had zero confidence in Felipe. Another survey, carried out in November 2018 by YouGov for the Huffington Post, revealed 48 percent of Spaniards to be in favor of a republic in Spain, with only 35 percent saying they wanted a constitutional monarch.

Felipe has addressed Catalan separatists directly just once, and in doing so he tacitly endorsed a central government whose actions have only radicalized Catalonia’s secessionist movement. The dialogue-based approach favoured by Spain’s new Socialist prime minister is likely to be more constructive; not only could it ease relations between Madrid and Barcelona, it may even find a way to balance recognition of autonomy with national unity. Any further royal interventions, such as the one made by Felipe in October 2017, won’t help Sánchez achieve either of these goals: they will only hold him back.

Mark Nayler is a freelance journalist based in Spain. He writes on Spanish politics and culture for southern Spain's English-language newspaper, Sur in English, and for The Spectator