"When Does the New Decade Begin: This Week, or a Year From Now?", Laura M. Olson

In recent years there has been debate about when a decade begins and ends. We break it down for you. 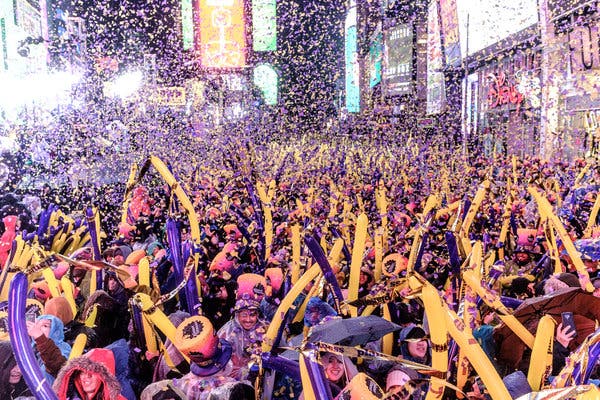 So, when should you host your end-of-the-decade party?Credit...Christopher Lee for The New York Times

Oh, to revel in New Year’s Eve. Cheer with good friends! A glass of Champagne or two. And, this year, ringing in a new decade.

In recent years there has been debate about when a decade begins and ends. For some people, the next decade will begin on Jan. 1, 2020, and end on Dec. 31, 2029. For others, it won’t start until Jan. 1, 2021, concluding on Dec. 31, 2030. To the average person — well, many of us — it can be very confusing. But what is correct? Should we celebrate the beginning of a new decade now or wait until next year, when it seems a little passé?

We decided to break it down for readers. We talked to an expert at the United States Naval Observatory, which runs the nation’s master clock. We interviewed an editor at the Farmers’ Almanac. We even talked to a curator of astrophysics.

There is one thing almost everyone agreed on. “Talking about it is a great way to get into a bar fight,” said Geoff Chester, an astronomer and a public affairs officer at the observatory.

Why is this a controversy?

First, a little history. In 1999, people got into a spat over when the new millennium began. At the center of the dispute was the Naval Observatory, whose calculations of time influence government satellites, your iPhone and more. The agency’s position was that the new millennium began on Jan. 1, 2001, Mr. Chester said. That’s because the observatory uses a modification of the Julian date to measure time. The modified system is used by astronomers and geodesists, who study the size of the Earth. (The original Julian date begins Jan. 1, 4713 B.C.)

So that settled it, right?

Not so fast. In 525, a monk named Dionysius Exiguus wanted to pinpoint the date for Easter. So he devised a calendar system called anno Domini, which was based on when he believed Jesus was born. A.D., which is Latin for “the year of our Lord,” is commonly used today. One glitch: Because it identified the date of Jesus’ birth as Year 1, not Year 0, there is a time gap, Mr. Chester said. There is a lot of debate about this online, but timeanddate.com, which studies such things, has a good explanation.

Gift subscriptions to The New York Times. Starting at €20.

Because of this, many people insisted the new millennium began on Jan. 1, 2000. It was widely debated and everyone had something to say. Mr. Chester, who was at the center of the kerfuffle back in 1999, sighed when asked to explain the different dates. “It’s one of those things where numbers don’t satisfy everybody,” he said. 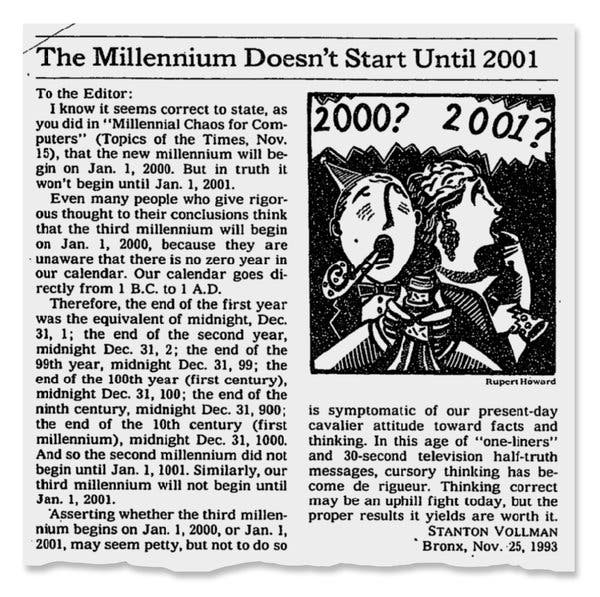 Did the debate make it easier to understand when a new decade begins?

Yes and no. Unlike the definition of daylight saving time, the definition of a decade is not governed by legal guidelines. But the debate got people talking. Mordecai-Mark Mac Low, a curator in the department of astrophysics at the American Museum of Natural History, said, “There are two different ways to designate decades.”

First, there is the modified Julian date. But, he added, “people work with language more than numbers.” The second way is to designate decades by popular convention and usage. An example? Most people would say the 1950s went from 1950 to 1959.

Mr. Chester agreed. “There is no absolute,” he said.

So what is the answer?

But that is out of sync with common usage. According to Emily Brewster, a senior editor at Merriam-Webster, a decade in popular culture is not defined by scientific convention. Because of this, the 2020s will begin on Jan. 1, 2020, and end on Dec. 31, 2029, Ms. Brewster said.

“It is interesting that there is this arbitrariness,” she said. “It’s unconventional, like language.”

So I can still throw an end-of-the-decade party in December, right?

Most definitely. Indeed, people have already begun celebrating the end of the 2010s. “This could be a great controversy,” said Peter Geiger, editor of the Farmers’ Almanac. “Or maybe it’s really just a great diversion.”