for Scotland and Northern Ireland, a Weakening of Ties

Both strongly opposed Boris Johnson’s Brexit plan. With that now a certainty, independence is in the air, particularly in Scotland. 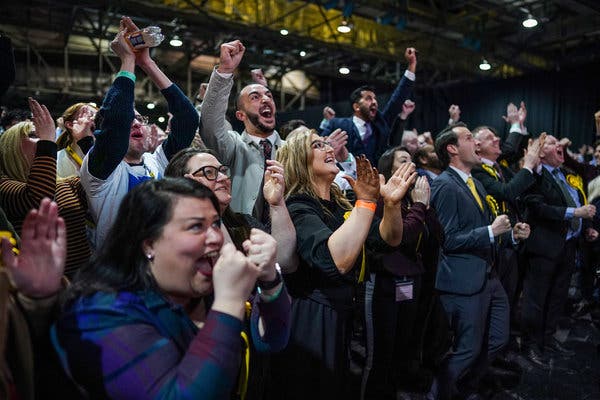 By Ceylan Yeginsu and Stephen Castle

LONDON — While voters across England embraced Prime Minister Boris Johnson’s Conservative Party, it was a different story in Scotland and Northern Ireland, where Thursday’s electoral earthquake has strained the ties that bind the United Kingdom and increased the risk of its eventual breakup.

In Scotland a constitutional crisis looms after the dominant Scottish National Party made significant gains, winning 48 of 59 seats, and said it would press its demands for a second independence referendum — something that Mr. Johnson has already rejected.

The background in Northern Ireland is more complicated. But for the first time in its history, the territory elected more nationalist members of Parliament, who support reunification with the Republic of Ireland, than unionists, who wish to remain a part of the United Kingdom.

“Brexit has completely transformed the debate in Northern Ireland,” said Daniel Keohane, an Irish political analyst. “Before Brexit, no one seriously thought a united Ireland would happen anytime soon. Now it’s a very real prospect based on these results.”

In Scotland, Nicola Sturgeon, the first minister, who leads the anti-Brexit Scottish National Party, said that it was “now clear beyond any doubt that an overwhelming majority of people in Scotland do want to remain in the European Union.” Then she demanded a repeat of the 2014 referendum in which Scots voted to remain part of the United Kingdom.

Nicola Sturgeon, Scotland’s first minister, said that it’s “now clear beyond any doubt that an overwhelming majority of people in Scotland do want to remain in the European Union.”Credit...Jeff J Mitchell/Getty Images

This was, she added, an “assertion of the democratic right of the people of Scotland to determine our own future.”

Such claims are unlikely to move Mr. Johnson, putting him and Ms. Sturgeon on a collision course. On Friday after a phone call between the two leaders, Mr. Johnson issued a statement saying that he had made clear to Ms. Sturgeon how he “remained opposed to a second independence referendum,” adding that the result of the 2014 vote “was decisive and should be respected.”

But the reality is that the politics of England and Scotland seem to be diverging. So while Mr. Johnson’s Conservatives won a landslide overall, they lost seven of their 13 Scottish seats despite their hopes that campaigning against Scottish independence might save them.

Removal from the European Union against its will is likely to feed a sense of resentment in Scotland, especially if Mr. Johnson’s Brexit plan proves as economically harmful as many expect.

In Northern Ireland it was a sobering night for the party that had championed Brexit there, the hard line Democratic Unionist Party. Its leader, Nigel Dodds, lost his parliament seat in Belfast North.

The Democratic Unionist Party had propped up the minority Conservative government since 2017, and ultimately felt betrayed when Mr. Johnson struck a new Brexit deal that leaves Northern Ireland linked closely to the European Union’s customs market, effectively severing it economically from the rest of the United Kingdom and putting a new border in the Irish Sea.

But an even more striking shift in Northern Ireland’s political trajectory, analysts say, is the startling support won by the centralist Alliance Party, which gained 8.8 percentage points in Thursday’s general election, more than any other party.

Unlike the territory’s main unionist and nationalist political parties, whose policies are mainly defined by sectarianism, the Alliance Party is neutral and has come to represent progressive and moderate politics across all communities.

“The real story of the night is the Alliance Party in the middle, which is now our third-largest party,” said Newton Emerson, a political commentator in Northern Ireland, who describes himself as a “liberal unionist.” “The big change we have seen in Northern Ireland is that we now have a three-community system.”

He said the troubled governance system created by the Good Friday Agreement, the 1998 pact that halted decades of sectarian strife in Northern Ireland, “now has a third leg on the stool.”

Frustrated by the political deadlock between unionists and nationalists that led to the collapse of the region’s governing assembly more than three years ago, many voters supported the Alliance Party, hoping that an electoral sting for the main parties would force them to revive the local power-sharing government.

“The political paralysis has had great consequences,” said Marie Kelly, a trainee nurse, who voted for the Alliance Party in Belfast. “Our health system is collapsing, we just don’t have the resources and deprived areas are suffering so so badly.”

Ms. Kelly, who previously voted for the Democratic Unionist Party, said she had wanted to punish it for focusing on Brexit alone and ignoring other important problems. “We need a more neutral political representation that prioritizes issues over ideologies.”

Stephen Farry, the deputy leader of the Alliance Party, who won in the Belfast constituency of North Down that the Democratic Unionists had been favored to win, said his victory was tied to the values of “moderation, rationalism and inclusion.”

The biggest disappointment in the election was felt by unionists and loyalists who vehemently oppose Prime Minister Boris Johnson’s new Brexit deal.

The unionists view the deal as a betrayal because it would require checks on goods flowing across the Irish Sea, effectively cleaving Northern Ireland economically from the rest of the United Kingdom.

“The poll clearly creates the expectation that Boris Johnson will try to force the Betrayal Act through Parliament,” said Jamie Bryson, a prominent unionist activist who is challenging the Brexit agreement in court. “The unionist-loyalist community have been clear. An economic United Ireland will never be tolerated.”

Senior members of the community insist that the deal breaches the consent mechanism of the Good Friday Agreement, which eased the legacy of bitterness between Protestant unionists and the Catholic republicans, who want Northern Ireland to become part of the Republic of Ireland. The new Brexit arrangement, they say, threatens to inflame sectarian tensions.

“If the political process has been exhausted then potentially, we could face some very dark days ahead,” Mr. Bryson said. “And that’s obviously something everyone wants to avoid.”

Mr. Keohane says it is understandable that unionists are upset about the customs arrangement because it will be more intrusive than most people wanted, but at the same time he said it is hard to imagine them attacking their own state.

“Of course, there will be some loyalists who will make a lot of noise about it. I don’t blame unionists for being upset,” Mr. Keohane said. “they have been betrayed by Boris Johnson, it’s as simple as that.”