John Bercow, Loathed and Lionized, to Step Down as Britain’s House Speaker 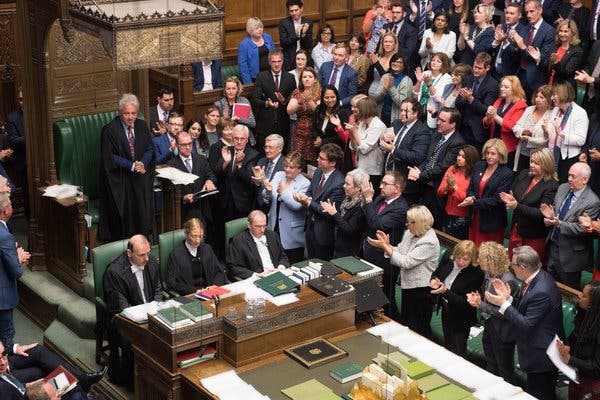 John Bercow, Speaker of the House of Commons, in London, was applauded by opposition lawmakers on Monday after he announced that he was stepping down.CreditCreditJessica Taylor/UK Parliament

LONDON — With his roaring cries of “Order! Order,” his antiquarian language and his constant needling of the government, John Bercow, the speaker of Britain’s House of Commons, became a celebrity of the Brexit era.

True to form, his announcement on Monday that he would leave his post and his seat in Parliament came wrapped with one final rebuke for Prime Minister Boris Johnson’s hard-line government. By timing his departure for the end of October, Mr. Bercow ensured that the current Parliament, packed with Johnson-averse lawmakers, would choose his successor.

That starved a future Parliament — perhaps one controlled by Mr. Johnson and purged of the Conservative rebels who defied him last week — from installing a more acquiescent speaker, one who would clear the government’s path to an abrupt Brexit. But it also left Mr. Bercow in place for long enough to preside over the electric run-up to the Oct. 31 Brexit deadline.

It was a fitting send-off for a speaker who galvanized so-called backbench members of Parliament, lawmakers who are usually consigned to following the orders of party leaders but, with Mr. Bercow’s help, have taken the reins at pivotal moments of the Brexit crisis.

Loathed by Brexit supporters and lionized by Remainers for allowing lawmakers to try to stop the country from leaving the European Union without a deal, he received a standing ovation from opposition lawmakers on Monday, while on the government benches there was mostly studious silence.

Mr. Bercow, at ten years the longest-serving speaker since the 1940s, said he had promised his wife and children in 2017 that he would not run in another election. But he was also facing a fresh challenge to his seat in Parliament. The speaker traditionally is allowed to run for re-election unopposed, but the Conservative Party, angry about his perceived anti-Brexit leanings, said in recent days it would put up a candidate against him. 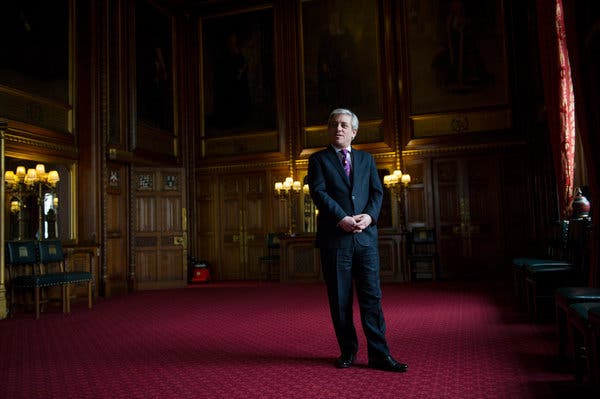 Mr. Bercow in 2013. He was known for his booming cries of “Order, order!” and his hyperarticulate, theatrical style.CreditLynsey Addario for The New York Times

Among the leading candidates for speaker are Harriet Harman, a Labour lawmaker known for trying to modernize the House of Commons, and Lindsay Hoyle, a deputy speaker.

In a sometimes teary address, Mr. Bercow pointedly warned of the way successive Conservative governments have tried to push through Brexit plans against lawmakers’ wishes. He suggested that the government’s view — that lawmakers should put aside their own ideas and carry out the 2016 Brexit referendum, no questions asked — was not in accord with the role of Parliament.

“This is a wonderful place filled overwhelmingly by people who are motivated by their notion of the national interest, by their perception of the public good and by their duty — not as delegates but as representatives — to do what they believe is right for our country,” he said. “We degrade this Parliament at our peril.”

What in another era might have been an anodyne salute to parliamentary democracy became, on Monday, a seething admonishment to Mr. Johnson’s government.

With his wife in the rafters, Mr. Bercow announced his departure on the last day Parliament was sitting before a premature dismissal, imposed when Mr. Johnson pulled a surprise parliamentary maneuver to suspend the body for five weeks. That move limited lawmakers’ time to pass a law averting a no-deal Brexit, but lawmakers moved quickly and got the law approved before being sent home.

The speaker of the House of Commons is a nonpartisan and normally low-profile figure who referees parliamentary debates. Elected as a Conservative, Mr. Bercow had to drop his party affiliation when he became speaker in 2009, and since then made a career of foiling his Conservative colleagues.

The son of a cabdriver from North London, he went to a local state school and scrapped his way up the ranks of Oxbridge-educated elites who dominate Conservative politics. At times, that isolated him in the clubby halls of Parliament, lawmakers say, but it also liberated him to annoy people unused to being annoyed. 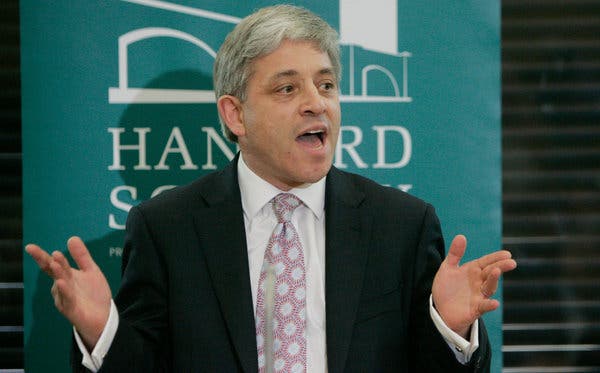 Mr. Bercow in 2009. He came to be loathed by Brexit supporters and lionized by those who wanted Britain to remain in the European Union.CreditAlastair Grant/Associated Press

The constant haggling over Brexit, and the weakness of recent British governments, gave Mr. Bercow a platform to intervene on behalf of lawmakers who wanted to stand in the way of a no-deal Brexit. The government usually keeps a tight grip on what happens and when in Parliament, but Mr. Bercow occasionally let lawmakers wrest control from the prime minister at crucial points in the Brexit debate.

His detractors accused him of politicizing what was supposed to be a neutral role. But his supporters said that not since 1642, when King Charles walked into the House of Commons and demanded that five lawmakers be arrested for treason, had it been so important for a speaker to resist an overzealous government.

Jeremy Corbyn, the leader of the opposition Labour Party, said on Monday that Mr. Bercow acted in the spirit of the speaker at the time of King Charles, William Lenthall, who refused the king’s orders.

Michael Gove, a prominent minister in Mr. Johnson’s government who tangled with Mr. Bercow as recently as last week, thanked the speaker, too.

Mr. Bercow, known for his booming voice and his hyperarticulate, theatrical style, squeezed in a typically polysyllabic farewell as he gave way to a deluge of congratulatory speeches, referring only glancingly to the political chaos that may await.

A version of this article appears in print on Sept. 10, 2019, Section A, Page 7 of the New York edition with the headline: Britain’s Hated and Hailed House Speaker to Quit. Order Reprints | Today’s Paper | Subscribe
tornar