Here There Be Dragons. But Can They Survive an Invasion of Tourists? 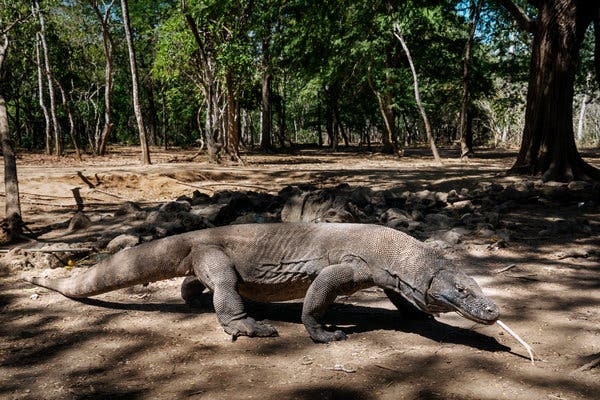 Komodo dragons are 10-foot lizards native only to a scattering of islands in Indonesia.CreditCreditAdam Dean for The New York Times

KOMODO NATIONAL PARK, Indonesia — The Komodo dragon, a 10-foot lizard native only to a scattering of islands in Indonesia, flicked its forked tongue. Two boys were standing nearby, the perfect size for dragon snacks.

A local guide shrugged at their unease and urged them closer to the reptile.

Komodo dragons resemble dinosaurs that missed their cue for extinction. Capable of smelling blood from miles away, they eat water buffaloes, deer and one another. Their saliva is laced with venom. Females are unsentimental enough to devour their own freshly hatched offspring.

Fatal attacks on humans are exceedingly rare, though they do happen. But the oversize lizard lounging near the two young tourists had just gorged on chicken and goat, and was lolling in the kind of digestive stupor Americans might experience after Thanksgiving.

It was safe, the guide promised, for a family photograph with the alpha predator, one of only about 3,000 dragons left in the world. 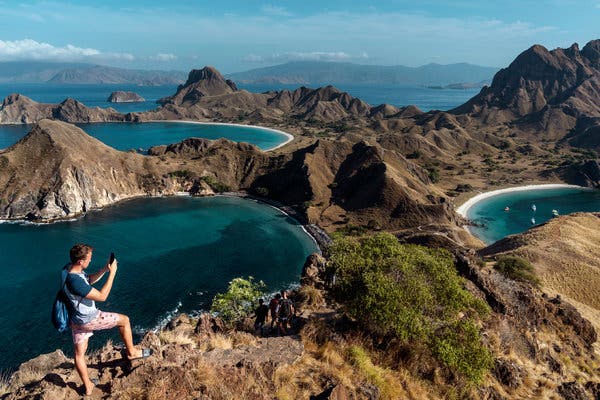 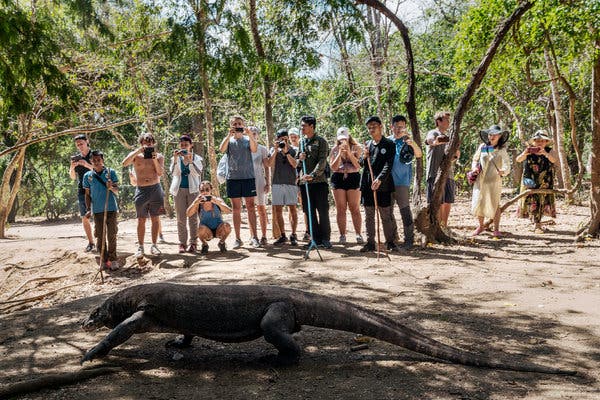 A Komodo dragon on Komodo Island.CreditAdam Dean for The New York Times

Tourists come to Komodo National Park, which stretches across a volcanic explosion of islands in the southern Pacific Ocean, because of the dragons and also for the vibrant sea life that lets snorkelers and scuba divers share the water with turtles and rays.

But like other tourist destinations around the world, from Venice to the Galápagos, the park is at risk of being wrecked by its own popularity. The inundation of tourists is threatening the very animals and pristine beauty drawing them there.

While Komodo tourism generates significant cash for one of Indonesia’s poorest regions, it has also brought piles of trash, human encroachment and occasional lizard smuggling. 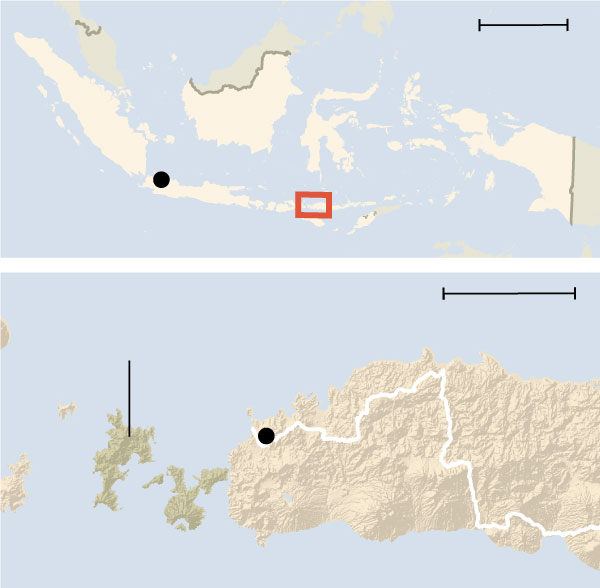 Some environmentalists worry that the stampede of visitors has set the ecosystem off kilter. Dragons, they say, should survive on wild deer and pigs, not chickens and goats tossed from the back of a truck by a ranger.

Over all, the number of foreign tourists who visited the entire national park, a UNESCO world heritage site, has doubled since 2015, and the number of domestic visitors has increased fivefold. The park is now on the cruise ship circuit, with thousands of people disembarking each day.

Concerned about the onslaught of visitors in this far-flung part of Indonesia, provincial leaders want to close the island of Komodo, where the largest population of dragons lives — and where the cruise ships dock — in January 2020. The island would be off-limits for at least a year. 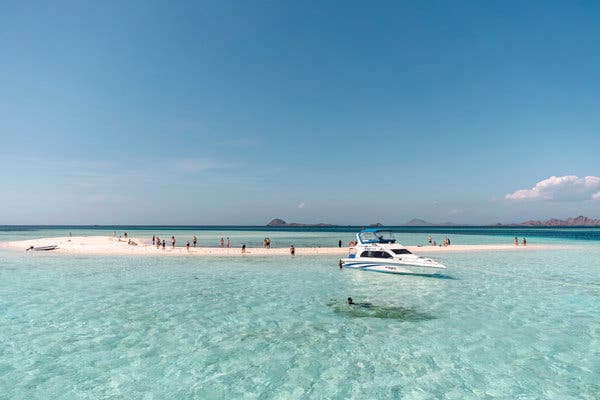 Tourists come to Komodo National Park because of the dragons but also for the vibrant sea life that lets snorkelers and scuba divers share the water with turtles and rays.CreditAdam Dean for The New York Times 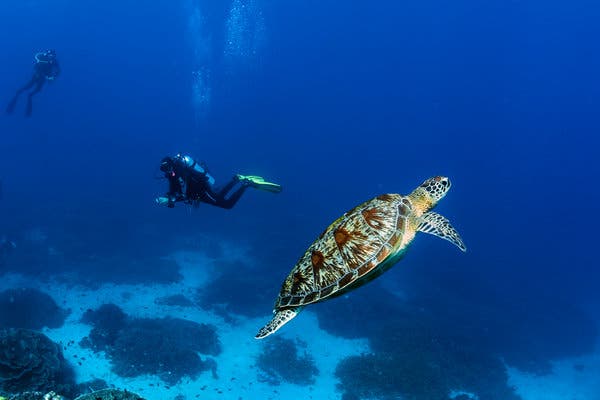 Sharing a swim together in Komodo National Park.CreditAdam Dean for The New York Times

Forgoing all that tourist revenue is no easy call for such a poor region, but officials say it is essential for the park’s future.

“If we don’t give the dragons their habitat, they will be extinct within the next 50 to 100 years,” said Yosef Nae Soi, the deputy governor of East Nusa Tenggara Province, which includes the islands that make up Komodo National Park.

But the plan may be thwarted by the Indonesian national government, which will make a final decision this year, officials from the national Ministry of Environment and Forestry say.

And even as local officials aim to close the island of Komodo, the national government has unveiled a plan to create 10 “new Balis” across the archipelago nation. It hopes to mimic the success of Indonesia’s most famous holiday isle, which faces its own severe overtourism.

“Indonesia needs to diversify its tourism destinations,” said Guntur Sakti, a spokesman for the national Ministry of Tourism.

One of the 10 “new Balis” is Labuan Bajo, a scruffy port town on the nearby island of Flores that is the gateway to Komodo National Park. 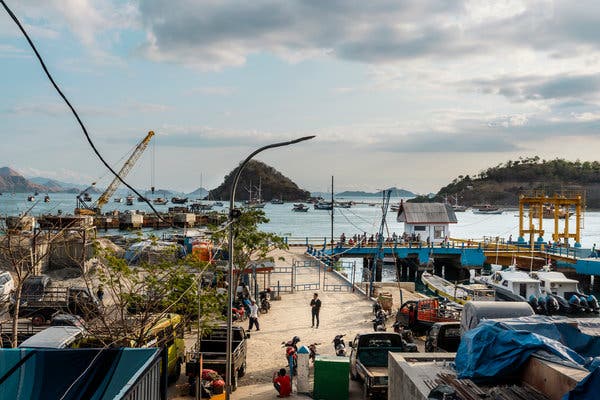 At the construction site of a new marina, hotel and commercial development in Labuan Bajo.CreditAdam Dean for The New York Times 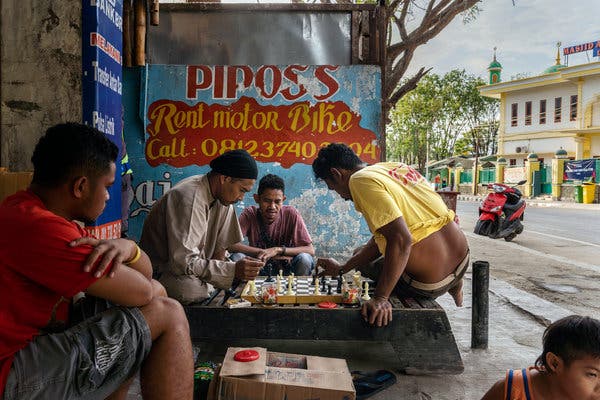 Playing chess in front of a mosque in Labuan Bajo.CreditAdam Dean for The New York Times

So far, the town’s main pier is still mostly occupied with local commerce. Boy stevedores heft bags of instant noodles and dried fish onto wooden boats. Glimmering fish dart past, and children take turns pushing one another off the dock.

But Labuan Bajo is being transformed, its once picturesque bay now a giant construction site, as the half-finished hulks of luxury hotels destined for dragon-spotters and divers rise in front of primordial jungle. The smell of wet concrete and construction dust mixes with the aroma of clove cigarettes and fried bananas.

Plastic bags float in the clear water, like mutant jellyfish.

“It’s changing, and that’s good for people like me,” said Sirilus Harmin, a guide who left his mountain home for new opportunities in Komodo National Park.

Working as the guides who lead walks in the dragon habitat, or operating souvenir stalls, are two of the few options the locals now have to get by since their traditional fishing and hunting ways were curtailed when the national park was formed in 1980.

But most of the $300 million in tourism dollars spent in the region does not reach locals, said Shana Fatina, director of the tourism authority board for Labuan Bajo, which is trying to make sure more of the spending flows into the pockets of those who live in the region. 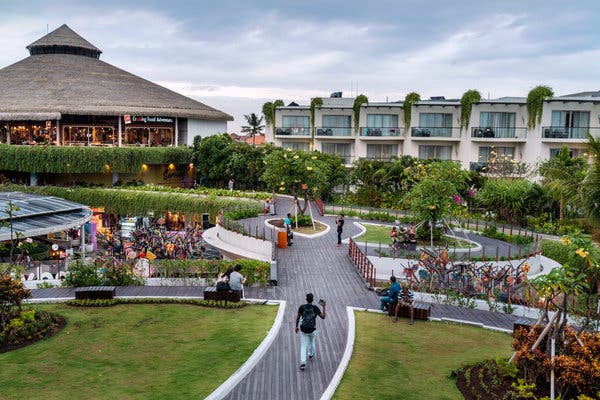 A shopping mall next to Kuta beach in Bali.CreditAdam Dean for The New York Times 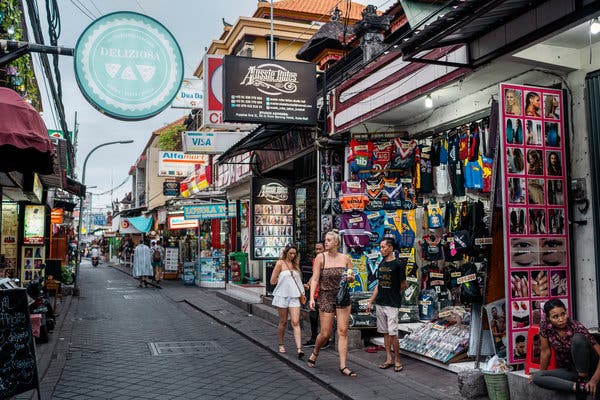 A shopping street next to Kuta beach in Bali.CreditAdam Dean for The New York Times

“We don’t want the communities to just be an accessory, we want them to be the main focus,” Ms. Shana said. “We want to educate the public that going to Komodo National Park is not like going to an amusement park.”

The Himalayan nation of Bhutan has avoided some of the ills of mass tourism by imposing high daily spending minimums, an effective if elitist solution that ensures that only the wealthy can experience the country’s charms. Some provincial officials in Komodo think that the price of meeting the world’s largest lizard should be increased to at least $500, up from the approximately $10 admission charge to the park today.

“Komodo has to have its prestige,” said Mr. Yosef, the deputy governor. “This is the only place in the world with Komodo dragons, so don’t sell them cheap.”

And if Bhutan offers one possible approach on controlling, and rarefying, crowds, another Asian country has already experimented with barring all visitors to a popular site of natural beauty. The early results are promising.

Last year in Thailand, tourism authorities closed off Maya Bay, a cliff-ringed beach that gained fame as the site of the Leonardo DiCaprio film “The Beach.” Much of the Technicolor coral reef had been destroyed by the thousands of tourists who descended each day.

Already, sharks have returned to Maya Bay and coral is regenerating, Thai park officials say. The marine reserve will be closed for up to five years.

If the island of Komodo is closed, the decision will affect not just the humans who wish to visit but also the humans who have lived among the dragons for centuries. They should be relocated, local authorities say.

Legend holds that these villagers — about 1,700 live on the island today — share the same ancestors as the dragons. Residents say the reptiles do not bother them much because of this ancient bond.

But Mr. Yosef, the provincial deputy governor, seems unsympathetic to the human inhabitants of Komodo. “Komodo Island is for the Komodo dragon,” he said. “The Komodo need a spacious place to live where there are no humans.”

And if people refuse to leave the island that has been their home for generations?

“If we have warned them and they do not listen, it’s their own fault if the Komodo eat them,” Mr. Yosef said. “It is our offering to the Komodo.” 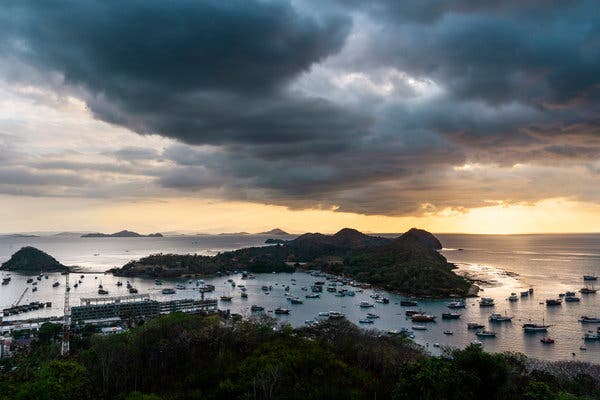 The construction site of a new hotel, marina and commercial development in the harbor in Labuan Bajo.CreditAdam Dean for The New York Times

A version of this article appears in print on Aug. 12, 2019, Section A, Page 6 in The International New York Times. Order Reprints | Today’s Paper | Subscribe 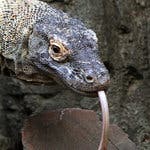