who is Boris Johnson, the man poised to be the next British leader? 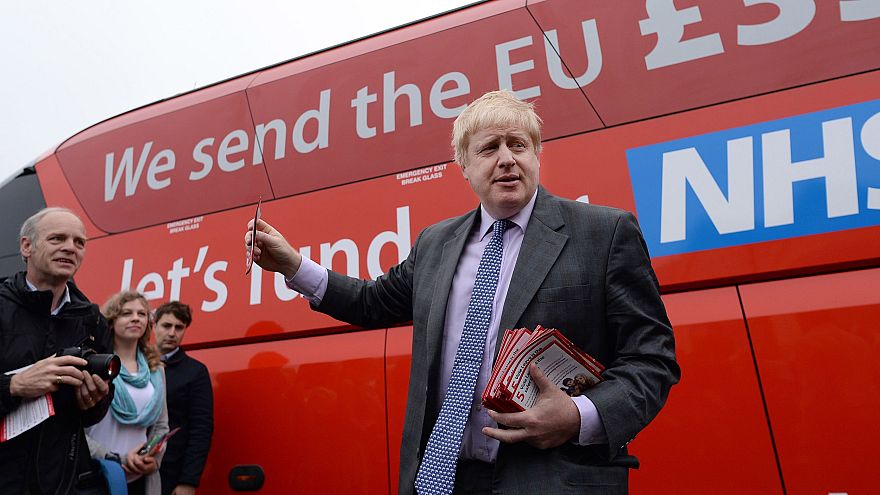 Former Mayor of London Boris Johnson before he boards the Vote Leave campaign bus in Truro, Cornwall, ahead of its inaugural journey which will crisscross the country over the coming weeks to take the Brexit message to all corners of the U.K. before the J -
Copyright
Stefan Rousseau

LONDON — Boris Johnson is one of the most divisive political figures in the United Kingdom.

He is also favorite among bookmakers and pollsters to become the next leader of the Conservative Party — and therefore the next prime minister — after Theresa May announced Friday that she would be stepping down June 7.

But who is this mop-haired eccentric, viewed by many as an inspiring political entertainer and by others as a dangerous populist?

May leaves a Conservative Party in open revolt. Johnson, a celebrity lawmaker who spearheaded the Brexit vote, is hoping to win over the rebels, finally make Brexit happen and be the leader to put the party back together.

But he's far from a consensus candidate. Thirty two percent of people have a positive opinion about him, according to the pollster YouGov, the highest of any politician in the country. But far more, 46 percent, hold a negative view.

"He has a polarizing effect," said Scott Lucas, a professor of politics and American studies at England's University of Birmingham. "He's probably the most liked politician but also one of the most disliked as well." 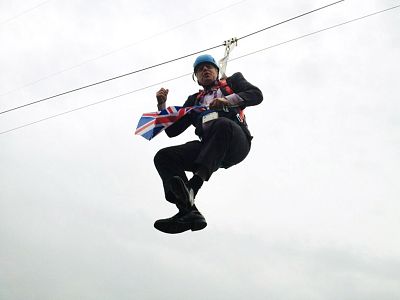 Critics accuse Johnson of being an arch opportunist. In the past, he has argued for tax cuts and against rises in welfare spending, and in the House of Commons he has voted generally in favor of equal gay rights, according to They Work For You, a website that tracks lawmakers' decisions.

However, there are still big questions about what his government would actually look like, including its relationship with the United States.

In 2015, when President Donald Trump said parts of London had been "radicalized," American-born Johnson, who was the city's mayor at the time, replied that the president's "ill-informed comments are complete and utter nonsense."

He added, "Crime has been falling steadily in both London and New York. And the only reason I wouldn't go to some parts of New York is the real risk of meeting Donald Trump."

Fast forward to last year, and the two were exchanging pleasantries, with Johnson saying there were many reasons for "admiring Trump" and the president declaring Johnson is "a friend of mine" and backing him to be the next prime minister.

There were also reports he had beentalking privately with Trump's former senior adviser, Steve Bannon.

Johnson will face competition for leader. Rory Stewart, the secretary of state for international development, and Esther McVey, the former work and pensions secretary, are among those to have confirmed they will run.

In the United Kingdom, choosing a new prime minister does not necessarily require a general election. If the leader of the largest party changes between elections, that person usually becomes the new prime minister automatically.

This happened when Cameron resigned in 2016 and May succeeded him unopposed. 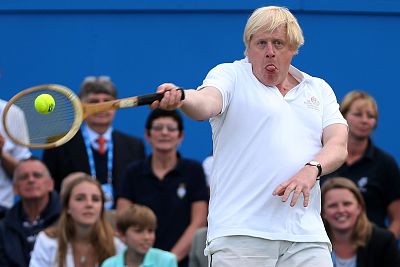 London Mayor Boris Johnson laughs in action during the Rally Against Cancer charity match on day seven of the AEGON Championships at Queens Club on June 16, 2013 in London, England.Clive Brunskill

Johnson would likely face a sterner test, with perhaps more than a dozen potential hopefuls lining up against him. Conservative lawmakers would winnow down this long list to a runoff of two, and the winner would be chosen by the 124,000-odd party members.

In any potential matchup, Johnson is the members' favorite "by huge margins," according to a YouGov poll earlier this month. But whoever wins will inherit a Conservative Party in disarray.

Its lawmakers are engaged in a civil war over Brexit and the party was polling as low as 7 percent ahead of European Parliament elections which took place in the U.K. on Thursday.

Even those who dislike Johnson's disheveled style may see him as their best chance of defeating populists on both the left and right, such as Labour Party leader Jeremy Corbyn and Brexit Party leader Nigel Farage.

Johnson — full name Alexander Boris de Pfeffel Johnson — is among that rare club of politicians instantly recognizable by one name only — "Boris."

Born in New York's Upper East Side, he held U.S. citizenship until 2006. He was educated at Eton — Britain's most prestigious private school — and Oxford University, before starting a career in journalism in the 1980s.

But he was soon fired by The Times of London for making up a quote. He later joined the Daily Telegraph as a Brussels correspondent, which still pays him £275,000 per year on top of his lawmaker's salary for a weekly opinion column.

Johnson is known for causing outrage with quips and turns of phrase that have been described as racist. In 2016, he called President Barack Obama "part-Kenyan" and suggested he had an "ancestral dislike of the British empire."

In 2002, he said that Queen Elizabeth II probably enjoyed touring the Commonwealth because of the "cheering crowds of flag-waving piccaninnies." He wrote that Tony Blair, then prime minister, would be met with "watermelon smiles" when he toured the Congo. He has also described Muslim women wearing the burqa as "letter boxes."

In 2008, he was elected mayor of London and he served for eight years. He announced himself to the world in August that year, waving a giant flag at the Beijing Olympics to promote London's hosting of the Games four years later.

Never shy of a photo opportunity, during the London 2012 Olympics, Johnson was pictured dangling helplessly from a zipwire waving a Union Jack flag. "This is great fun but it needs to go faster," he told the assembled reporters. 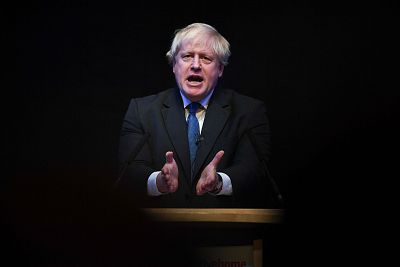 British Conservative Party politician Boris Johnson gives a speech during a fringe event on the sidelines of the third day of the Conservative Party Conference 2018 at the International Convention Centre in Birmingham, on Oct. 2, 2018.Paul Ellis

In 2016 he lent that star power to the Brexit campaign, electrifying the referendum with his crowd-drawing speeches and barnstorming rhetoric about Brexit being "our independence day."

"He isn't a typical British politician," Lucas at the University of Birmingham said. "He has always played up the idea that he is this really smart guy, but also a bit of a bumbler."

Brexit has left Johnson particularly reviled by pro-E.U. "Remainers," not least because of his campaign's discredited mantra that Britain sends £350 million to the E.U. each week.

His Brexit victory forced the resignation of his old friend, the then Prime Minister David Cameron, who backed the opposing, pro-E.U. side in 2016.

Johnson launched a leadership bid then — but withdrew after his ally Michael Gove unexpectedly announced he would run against him.

But last week, even before May had announced her departure, Johnson confirmed he would be running to replace her.