By Ben Hubbard and Catherine Porter

BEIRUT, Lebanon — Saudi Arabia took concrete steps to disengage economically from Canada on Wednesday, escalating the feud over Canadian criticism of Saudi rights abuses and demonstrating that its expulsion of the Canadian ambassador this week was more than a symbolic protest.

It earlier said it would suspend flights by Saudia, the national carrier, to Canadian airports starting Monday and informed traders that it would not buy Canadian barley or wheat.

The measures came in response to two Twitter posts by Canada’s Foreign Ministry last week calling on Saudi Arabia to immediately release imprisoned rights activists, including two who have family in Canada.

On Monday, the Saudi government responded by expelling the Canadian ambassador to Riyadh, Dennis Horak, recalling the Saudi ambassador to Ottawa and freezing all new trade and investment deals with Canada. It also said it would transfer thousands of Saudi students who were studying in Canada to schools in other countries.

The unusually strong reaction shows that Saudi Arabia, under the day-to-day leadership of Crown Prince Mohammed bin Salman, 32, is willing to wield its wealth to deter Western countries from criticizing how its absolute monarchy is run.

Prince Mohammed, who has emerged as the kingdom’s most dynamic official since his father, King Salman, assumed the throne in 2015, has made similar moves against Sweden and Germany in response to criticism.

For now, both Saudi Arabia and Canada appear to be sticking to their positions.

Asked Wednesday if his government would consider an apology to Saudi Arabia to smooth things over, Prime Minister Justin Trudeau said: “Canadians have always expected our government to speak strongly, firmly, clearly and politely about the need to respect human rights at home and around the world. We will continue to do that.”

In Riyadh, Foreign Minister Adel al-Jubeir told reporters that mediation in the dispute was not possible and that Canada needed to “fix its big mistake.” He said: “There is nothing to mediate. A mistake has been made and a mistake should be corrected.”

The kingdom, he said, is considering unspecified “additional measures” against Canada.

Mr. Trudeau said that the foreign affairs minister, Chrystia Freeland, had a “long conversation” with the Saudi foreign minister on Tuesday, and that diplomatic talks between the countries would continue.

The United States, which has strong diplomatic and economic ties with both countries, has taken a neutral stance on the dispute.

“Both sides need to diplomatically resolve this together,” the State Department spokeswoman Heather Nauert told reporters on Tuesday. “We can’t do it for them; they need to resolve it together.”

She encouraged Saudi Arabia to “respect due process and publicize information on some of its legal cases.” 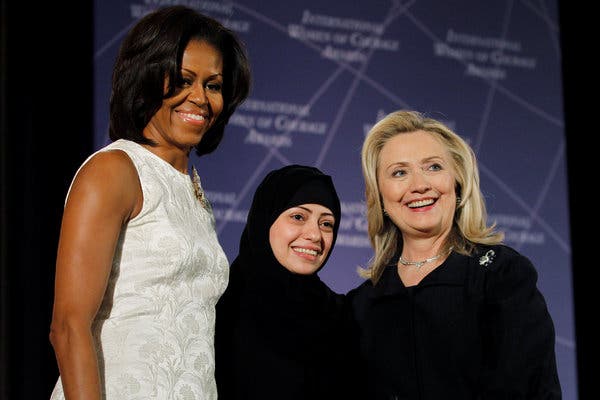 The State Department, in its annual human rights report, has frequently criticized Saudi Arabia on similar grounds to those stated by Canada. The latest edition accuses the kingdom of holding political prisoners, conducting executions without due process and engaging in the “arbitrary arrest and detention” of lawyers, human rights activists and government critics.

The Canadian government referred specifically to the case of Samar Badawi, a longtime women’s rights activist who was jailed last week at the same time as a colleague, Nassima al-Sadah. A tweet by Foreign Minister Freeland also referred to Ms. Badawi’s brother, Raif Badawi, a blogger who was imprisoned and publicly caned for running a liberal website.

The Saudi government has locked up dozens of clerics, businessmen and activists since last year. It has rarely provided any information on why they were arrested or whether they have been charged with any crimes.

Saudi Arabia has dismissed the Canadian criticism as an unjustified intervention in its internal affairs, and Saudi-owned television stations have aired content aimed at tarnishing the image of Canada.

The withdrawal of Saudi students from university and college campuses across Canada appeared unlikely to cause much disruption; they account for fewer than 2 percent of international students in the country.

Some campuses will be hit more than others. At the University of Regina, a small school in the middle of Canada’s prairies, for instance, Saudis make up 7 percent of international students — and pay hefty international tuition fees.

It is not merely a matter of revenue.

“The richness of the culture these students bring, the ideas they share from so far away, I think that’s the biggest loss,” said Livia Castellanos, an associate vice president at the university.

The Saudi students, she said, were stunned at having to leave their homes, cars, furniture and studies with less than four weeks’ notice. “They have invested a lot of their life here,” she said.

On Wednesday, the Saudi state news agency also said the kingdom was no longer sending patients to Canadian hospitals. It was not immediately clear how many Saudi patients are in Canada, but many Saudis have surgery and other complicated treatments abroad, often paid for by their government.

“We are hopeful the situation can be resolved,” he said.

While the Saudi sanctions may touch individual sectors, they will not have a great impact on the overall Canadian economy, analysts say.

Cam Dahl, president of Cereals Canada, said farmers were more likely to be troubled by the larger picture: the general rise in protectionism. Just last year, Italy slapped a made-in-Italy labeling on imported durham wheat, which led to exports from Canada for Italian pasta all but collapsing, he said.

“It’s part of a protectionist environment we are in right now and it’s troubling,” Mr. Dahl said.

Saudi Arabia and Canada do about $4 billion a year in bilateral trade. In 2017, Canadian exports to Saudi Arabia totaled $1.1 billion, a fraction of a percent of Canada’s total exports.

A few countries, including Bahrain and Egypt, have stated their support for Saudi Arabia’s position, but without announcing concrete steps of their own.

The Egyptian Foreign Ministry said in a statement on its Facebook page that it was “concerned” about the split between Canada and Saudi Arabia. It blamed international powers “meddling in the internal affairs of countries in the region” for the tensions.

Ben Hubbard reported from Beirut, and Catherine Porter from Toronto.