(Washington, DC) – United States authorities should move quickly on an investigation of suspected corruption and money-laundering by the eldest son of President Teodoro Obiang Nguema Mbasogo of Equatorial Guinea, Human Rights Watch said today. On October 6, 2011, the Justice Department filed an official notice in California of a pending claim for the forfeiture of more than $70 million in assets, including a mansion, jet, and Michael Jackson memorabilia belonging to the younger Mr. Obiang. 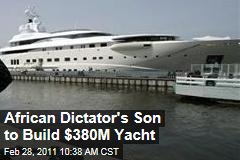 Teodoro Nguema Obiang Mangue, known as Teodorín, is minister of agriculture and forestry, the vice-president of the ruling party, and his father’s presumed choice to succeed him in power in the tiny, oil-rich West African country. He is known for his lavish, jet-setting lifestyle and love of luxury vehicles, which contrast sharply with the low living standards of the majority of the inhabitants of Equatorial Guinea.

“US authorities have turned up stark evidence of corruption by President Obiang and several of his family members in multiple investigations since 2003,” said Arvind Ganesan, business and human rights director at Human Rights Watch. “The move to go after his son’s US assets, though belated, is a good step.”

Obiang’s son is also a target of related investigations in France and Spain, along with President Obiang and other relatives and associates.

The move to seize the assets was first reported by Foreign Policy magazine online on October 13. It stems from a case in US federal court for which details are not publicly available but that is probably an outcome of an investigation into suspected corruption and money-laundering by Teodorín Obiang. The Justice Department initiated the investigation in 2007, following a US Senate investigation from 2003 to 2004.

The Justice Department’s legal action names Sweetwater Malibu LLC, a company belonging to Teodorín Obiang, and seeks the forfeiture of a variety of valuable assets, including a $30 million Malibu mansion, a $38.5 million jet, seven luxury cars worth almost $3 million and valuable Michael Jackson memorabilia, such as “one white crystal-covered ‘Bad Tour’ glove.”

The Justice Department and the Immigration and Customs Enforcement agency opened investigations into suspected money-laundering by the younger Mr. Obiang after a 2004 Senate report that is known as the “Riggs Bank report” for its focus on accounts in a since-closed Washington-area bank. The Senate report revealed that the bank “turned a blind eye to evidence suggesting that [it] was handling the proceeds of corruption” in its dealings with President Obiang, his relations and other officials. In one example, millions of dollars of Equatorial Guinea’s national oil revenues were transferred to a private offshore account that Senate investigators concluded was controlled by President Obiang.

In a September 2007 memo, the Justice Department’s Criminal Division wrote that an investigation was ongoing into “suspected criminal conduct by Teodoro Nguema Obiang and his associates involving the illicit transfer and laundering of assets believed to be derived from extortion, bribery and/or the misappropriation, theft or embezzlement of public funds.”

An Immigration and Customs Enforcement document declared that a goal of the investigation was to “identify, trace, freeze and recover assets within the United States illicitly acquired through kleptocracy by Teodoro Nguema Obiang and/or his associates.”

A 2010 Senate report following up on the Riggs Bank study featured a detailed case study on Teodorín Obiang and his suspected laundering of more than $110 million in suspect funds through US bank accounts between 2004 and 2008. The funds, as documented in the report, financed an opulent lifestyle that included a fleet of sports cars and motorcycles worth $9.5 million and a “Nguema Summer Bash” featuring a live white tiger. The report described the Justice Department’s criminal inquiry of Teodorín Obiang as “ongoing.” Teodorín Obiang transported 22 vehicles out of the US to Equatorial Guinea via France in 2009, according to a Le Monde report, citing customs records.

Neither the government of Equatorial Guinea nor Teodorín have responded publicly to the news of the pending asset forfeiture action. In 2010 the Obiang government issued a strongly worded statement saying that the allegations in the Senate report were unproven and rooted in prejudice, denouncing it as “clearly a RACIST, XENOPHOBIC, ARROGANT and SEGREGATIONIST document.” (Emphasis in the original.) The government also gave its “complete support, confidence and backing” to Teodorín.

Human Rights Watch expressed hope that the claim against assets held in Sweetwater’s name may signal a reinvigorated criminal inquiry against Mr. Obiang. In its 2009 study, Human Rights Watch called on the US to deny visas to officials of Equatorial Guinea who have been implicated in corruption and to identify any assets they hold in the US, with the intent of seizing the proceeds of corruption and eventually returning them to the country’s people.

In September, French police seized 11 luxury vehicles belonging to the younger Mr. Obiang from outside his Paris residence in connection with their investigation into ill-gotten gains of various African officials. As reported by Le Monde, French police have catalogued his recent purchase of nearly $26 million on antiquities and other goods at auction. The lavish spending raised suspicions among French anti-money-laundering officials that the items were purchased with misused funds.

Police in Swaziland opened an investigation into the theft in late August of a suitcase belonging to the younger Mr. Obiang that reportedly contained some $400,000 in cash ($300,000 in dollars and 75,000 euros) and two expensive wristwatches. He reported the suitcase stolen from the five-star villa where he was staying during a visit.

“The move to freeze Teodorín’s assets in the US is overdue,” Ganesan said. “But the real test will be if the US government vigorously pursues the inquiry to its conclusion without letting diplomatic or business ties stand in the way.”

Equatorial Guinea has high oil revenues and a small population, making its per capita gross domestic product among the highest in the world. But the government has failed to make improvements in socio-economic conditions commensurate with available resources.

The per capita GDP is equivalent to that of some of the worlds’ top-tier economies yet many of the people of Equatorial Guinea lack access to basic social services. The country is 19th worst in the world for child mortality, according to 2010 UN and World Bank statistics. Education spending as a percentage of GDP is lower in Equatorial Guinea than in neighboring countries. The government has invested huge sums in high-profile projects, such as ultra-modern hospitals, luxury conference centers, and a lavish $830 million resort complex built to host the June 2011 African Union summit meeting that have little benefit for the poor.

After Human Rights Watch published a 2009 report on oil, corruption and human rights in Equatorial Guinea that detailed government abuses and the lack of transparency, the Obiang government responded by accusing the group of “blackmail” and “pulling from their sleeves information that lacks all transparency and objectivity.”

The US State Department’s human rights report for 2010 describes an array of serious abuses, including unlawful killings, systematic torture, and official impunity and denounces “official corruption at all levels of government” in Equatorial Guinea, specifying that “[t]he president and members of his inner circle continued to amass personal profits from the oil windfall.”

The legal proceedings involving Teodorín Obiang come as speculation mounts that he is being positioned to succeed his father in power. On October 14, the Obiang government set a November 13 date for a referendum on proposed changes to the constitution. The centerpiece of the announced reform is the introduction of term limits that would allow the 69-year-old President Obiang, who has been president for the past 32 years, to serve for two more terms of 7 years each.

President Obiang was re-elected in 2009 with 95.4 percent of the vote in an election with weak international monitoring, raising “the suspicion of systematic voting fraud” according to the US State Department.

While the government has not yet published a text of the constitutional changes that will go to a vote, they are understood to create a new post for a vice-president that observers expect will be filled by Teodorín Obiang.

In 2010, Teodorín Obiang was elected to head the ruling party’s youth wing, which automatically conferred on him the vice-presidency of the ruling party. The US public relations firm that represents the government of Equatorial Guinea and also has a separate contract with the younger Mr. Obiang, hailed his selection as “part of a broader effort by the government to improve the democratic election process for its citizens.”

Along with declaring the date of the national referendum, Equatorial Guinea also announced that Teodorín would be its deputy permanent delegate to the Paris-based United Nations Economic, Scientific and Cultural Organization (UNESCO). President Obiang has unsuccessfully sought to reinstate a controversial UNESCO prize financed by and named after him. The senior Obiang’s most recent effort to force UNESCO to issue the award, in September, was scuttled in part because news of the seizure of Teodorín’s assets in Paris, a short distance from UNESCO’s headquarters, highlighted the risk of associating the organization with the reputations of the Obiangs.

“The people of Equatorial Guinea should be able to choose their government in free and fair elections, hold it accountable, and apply the country’s wealth to fulfill their basic needs,” Ganesan said. “Unfortunately, President Obiang does not provide leadership that respects such basic rights, and his son seems to be following his father’s path.”